Oil Suffers Biggest Weekly Loss Since 1991 With Demand In Focus 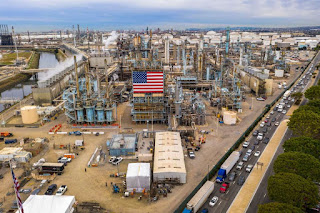 The Marathon Refinery is seen in Carson, California, on March 9, 2020. - Global stocks and oil prices rebounded on March 10, 2020 on hopes of US economic stimulus efforts as the coronavirus rages, one day after suffering their biggest losses in more than a decade. Trading is exceptionally volatile as investors attempt to get a grip on a rapidly changing news flow, with positive reports of progress in China on the virus clashing with a Saudi decision to increase oil output in an already over-supplied market. Image: David Mcnew/AFP/Getty

Futures in New York tumbled 11% Friday, bringing the week’s plunge to 29%, the biggest since January 1991. Some traders see demand shrinking as much as 10 to 20 million barrels a day as drivers stay home and flights are grounded across the world. Two of the three commissioners at Texas’s oil agency are skeptical of a plan currently being weighed to curtail crude production in the state in an effort to balance global supply with demand and stabilize prices.

will happen is still an overhang and destabilizing markets,” said Ryan Fitzmaurice, commodities strategist at Rabobank. “A deal between Texas and OPEC would have been unthinkable a few weeks ago.”

Texas Railroad Commissioner Ryan Sitton said Friday he was invited by OPEC Secretary General Mohammad Barkindo to attend the group’s summer meeting in Vienna. Sitton, one of three voting members of the commission, is proposing that the U.S. coordinate with Russia and Saudi Arabia to curb supply.

“With other governments manipulating oil markets, it’s fair to ask: Why shouldn’t our government step in to try to reinstate a more market-based approach?” Sitton said in a Bloomberg Opinion column. “It would stave off a total oil industry meltdown.”

The plan comes as the nearest timespread for the U.S. benchmark indicated its deepest oversupply since 2016.

The American shale industry has found itself caught in the middle of the fight between Saudi Arabia and Russia. The sector has so far scaled back operations and is also threatened with a wave of bankruptcies.

For more articles like this, please visit us at bloomberg.com