Echoes From The Mad House: The Case Of Sanusi 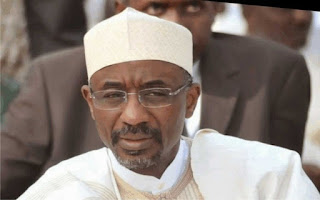 I don’t like Sanusi. I consider him spectacularly flippant. He was the one who made an accusation, based on no evidence but on his ipse dixit alone, that a humongous $20bn went missing under President Goodluck Jonathan’s watch. He was at the vanguard of the Fulani establishment with the desire to seize power from the feckless or shoe less fisherman from the creeks of the Niger Delta. Till date, he hasn’t been able to prove that assertion. The administration he helped installed quietly closed the books on that. He is a hatchet man.

I refused to be moved by his very many pandering to populism especially in the light of his fall out with the ascendant Fulani establishment he helped installed. He talks ,and that's about it. Anyone can talk but what is most important is leadership by example. Sanusi talks about the evil of child bribe in public. Whereas in private, he was involved in a dalliance with Sa’adatu Barkindo-Musdafa, daughter of the Lamido of Adamawa, Muhammadu Barkindo-Musdafa, when she was 16 and got married to her when she attained the age of 18. He talks about limiting the number of women, an adherent of Islam should be allowed to marry, so as to curb the almajiri phenomenon but yet again he refused to lead by example. He, himself, has an ever changing harem of four wives! How does he even live this hypocrisy down? He talks about the economy in platitudes. People mistake his locution in English as a sign of intellect. Everyone is capable of speaking that way if exposed to the kind of privileges Sanusi has had in his life.

He pretends to be a liberal Muslim but his records show otherwise. Sanusi earned a degree in Sharia and Islamic Studies from the International University in Khartoum, Sudan. It is known that when he came back to Nigeria he became a leader in Wahhabism, the ultra conservative branch of Sunni Islam and a movement among fundamentalists with an aspiration to return to the primordial fundamental Islamic sources; Quran, Hadeeth and Scholarly consensus (Ijma)) Islamic believers. Wahhabism was a popular revivalist movement instigated by an eighteenth century theologian, Muhammad ibn Abdal-Wahhab (1703–1792) from Najd, Saudi Arabia. His teachings came to a head in 1995 when he led a mob to behead an Igbo trader by the name Gideon Akaluka who had been arrested for desecrating the Quran. He was only saved from Abacha’s hangman’s noose by the intervention of former First Bank chairman, and father of Christmas Day bomber, Alhaji Umar Mutallab and others. Alhaji Muttallab then a heavy sponsor of Islamic activities prevailed on Abacha to spare Sanusi. Instead of the hangman’s noose he was removed from Kano to Sokoto where he was detained for two years. After his release from prison, it was also Alhaji Muttallab that got him a start in Banking. The rest is history.

He engages in the well worn Islamic principle of the taqqiyya to present a progressive facade to the public when in truth he is a fundamentalist to whom the life of the unbeliever do not matter. His teachings is the foundation upon which the wahhabist teachings of Boko Haram is founded on. Now I hear talk of presidency for him in 2023, I say Goodluck to y’all on that.

To me his dethronement is good riddance to bad rubbish.”
Essay Islamic Jihadists Lamido Sanusi Nigeria