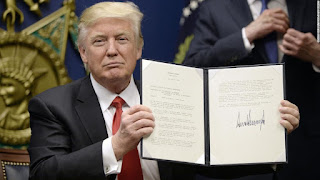 OTTAWA, CANADA — U.S. President Donald Trump’s decision to slap visa restrictions on six new countries could affect immigration flows to Canada, if history is any indication, as those caught up in the changes find new reasons to come here.

Past U.S. immigration policy moves on Haiti and Iran saw asylum claims and student visa applications for Canada jump, and now Trump is targeting Nigeria, Sudan and Eritrea, already among the largest sources of refugee claims lodged by people crossing irregularly into Canada from the U.S.

Later this month, citizens of those and three other countries will be largely restricted from obtaining permanent residency in the U.S., though some will still be able to qualify for tourist and business visas.

Past internal government analysis of the border crossers found many hold U.S. visas, sometimes obtaining them expressly to travel to Canada to claim refugee status.

Now, with the door slamming shut on permanent residency in the U.S., more people could eye Canada, suggested Robert Falconer, an immigration researcher at the University of Calgary policy school.

“One of the potentially negative impacts is that I think we will see a reversal in the decline of (refugee) claims, especially from Nigeria,” he said.

“You could see people who thought they might be able to obtain a green card in the United States instead shift their prospects to Canada.”

Not all may seek asylum.

In 2017, Trump sharply restricted immigration from several countries, including Iran. The year before, 2,437 Iranians applied to Canada for a study permit. In the first 11 months of 2019, 13,277 people applied.

With Nigeria’s booming middle class, there could be a similar positive impact, said Falconer.

“We’re likely to see an increase in high-skilled individuals moving their prospects to Canada,” he said.

Still, Nigeria is currently the largest source country for border crossers, making up 14,621 of the 50,635 claims lodged between February 2017 and September 2019, the most recently available data.

Those crossing between formal border points do so because of the Safe Third Country Agreement, a deal prohibiting people from requesting asylum at land border offices.

Though people have always skirted the deal by crossing at unmarked border points, the problem began to escalate the year Trump took office.

In 2016, the RCMP intercepted 2,464 people crossing irregularly into Canada. In 2017, 20,593 were stopped. The Liberal government has repeatedly said modernizing the agreement is a priority, but briefing notes for the federal immigration minister have suggested little real work is getting done.

That’s not surprising, said Sharry Aiken, an expert on immigration and refugee law at Queen’s University.

When asked what impact, if any, Trump’s new restrictions could have, a spokeswoman for Public Safety Minister Bill Blair did not directly answer the question.

“While there are ebbs and flows in the number of monthly arrivals of irregular migrants, we remain prepared for these fluctuations,” Mary-Liz Power said in an email.

Canada was nearly caught off guard in the early days of Trump’s hard line on immigration.

A 2017 decision to signal the end of program giving Haitians a reprieve from deportation prompted thousands to seek asylum in Canada, with sometimes hundreds crossing in a single day.

Among other things, the surge prompted the Liberals to launch multiple campaigns to thwart the crossings, including sending MPs to Haitian communities to warn against crossing the border irregularly to request asylum.

Statistics suggest there was an effect. In 2017, 8,286 Haitians sought asylum in Canada, according to the Immigration and Refugee Board. In 2018, that number was 1,496.

This report by The Canadian Press was first published Feb. 3, 2020.
Canada Immigration Newsroom