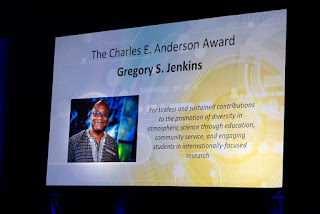 Gregory Jenkins was honored with the American Meteorological Society’s (AMS) Charles E. Anderson Award for his tireless and sustained contributions to the promotion of diversity in atmospheric science through education, community service and engaging students in internationally focused research, according to the society.

Jenkins, a professor of meteorology at Penn State, said he’s honored to be recognized with an award that bears the name of the nation’s first African American to earn a doctorate in meteorology.

“I had the honor of meeting him as a postdoctoral researcher, and he imparted his wisdom to me,” Jenkins said. “I have a deep level of respect for him and Warren Washington, who were pioneers in the field.”

Jenkins’ research focuses on atmospheric hazards in West Africa, where air quality threatens more than 350 million people. At Penn State, Jenkins is the director of the Alliance for Education, Sciences, Engineering and Development in Africa, which builds research and education partnerships between Penn State and African institutions. He also helped establish the Penn State chapter of the national EnvironMentors program, which aims to improve underrepresented students in STEM fields through mentoring partnerships.

“To me, a big part of the University is about empowering people,” Jenkins said. “Young people can find solutions that go beyond the classroom. We can teach them things, but until they make that knowledge more than an inert piece of information, it has no power. So, it’s about how we help them find their power.”

Jenkins was honored at the 2020 AMS Annual Meeting, held from Jan. 12-16 in Boston, which he attended to present research and to engage with mentors and former students.
Africa Newsroom Pew Research