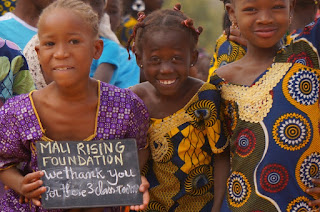 Two years ago, as part of Catholic Schools Week, JMCHS students collected $4,300 through a variety of activities, including bake sales and so-called “silly activities.” The money was donated to Mali Rising, a nonprofit foundation that builds middle schools in isolated areas of Mali.

“That year we really wanted to focus on a school, so we connected with Mali Rising and found out there was a way we could raise money to help build a school,” Campus Minister Celina Poppe said.

JMCHS also ended up winning a naming contest for the Sankama school. For the contest, every $100 donated received an entry. Ultimately, the students decided to name the school in Mali after Judge Memorial.

Fast forward two years: The four-room middle school was formally opened during a two-week January tour by U.S. Mali Rising Executive Director Merritt Frey and her staff. Before she left for Mali, Frey visited JMCHS and collected letters the students had written to their peers in Sankama, along with JMCHS T-shirts to share with the Mali students.

Seeing the positive results of their fundraising has been a great thing for JMCHS students, Poppe said. (The annual fundraiser is spearheaded by the students in the peer ministry class).

“I think the real difference came this year when I was able to tell them, ‘Remember you donated that money? Well, all of that money made a difference.’ It was a great moment for them,” she said.

In addition to the 2018 fundraiser and the letters, students in the school’s peer ministry class participate in an ongoing service project to make French/English flash cards for the Mali students, along with menstrual kits for the female students.

This year campus ministries teamed up with the school’s Interact Club to put on another fundraiser. Each year, Interact, a Rotary-sponsored service club, is required to raise money for an international project. After researching the possibilities and contacting a Catholic diocese in Australia, the Interact Club came up with the idea to help fund Australian wildfire relief and the St. Vincent de Paul Australia Vinnie’s Bushfire Appeal.

“We thought we would join forces with campus ministry during Catholic Schools Week this year because they have a similar goal of raising money for an international charity,” club adviser Karla Keller said.

With the funds generated through the appeal, St. Vincent de Paul Australia provides food, clothing and shelter to families evacuated due to the bushfires, along with helping provide resources to those who have lost their homes in the fires.

The school raised $3,700 for the wildfire relief, but Interact Club members plan to make an appeal for matching funds to the Salt Lake City Rotary chapter in the coming weeks, Keller said.

“It was a pleasure to work with Campus Ministry on this joint project and we look forward to future service endeavors, locally and internationally,” Keller said.
Africa Mali Newsroom Society