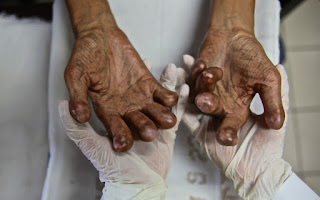 ABUJA (THIS DAY LIVE)--The federal government has said that 18 states are currently leprosy endemic, with few cases of the disease also being reported in others.

It said Nigeria was among the few countries in the world still reporting above 1000 new cases annually, adding that in 2018 the country recorded 1095 new leprosy cases.

According to the 2015 National Leprosy Review, government said 18 states were still endemic in leprosy although there were pockets of endemicity in few other states of the federation.

The Minister of state for Health, Senator Olorunnibe Mamora, who stated this at the ceremonies marking the 2020 World Leprosy Day, held in Abuja recently, said the federal government has made notable progress in tackling the scourge through the National Tuberculosis and Leprosy Control programme by ensuring treatment for over 33,000 patients from 2009 till date, including men, women and children.

He also said the country was among the countries that met the target of reducing the prevalence to one leprosy case to 10,000 persons.

The minister said that the country presently has at least one multi-drug therapy clinic for management of leprosy patients in each of the 774 local government areas, while it maintains free medical treatment for the patients.

He said the World Leprosy Day celebration which is usually observed on the last Sunday of every January was used to mobilise support for leprosy control.

He said that the occasion provided opportunity for Nigeria to focus attention on the ancient disease which has caused a lot of pain and misery to humanity over the years.

He said the day gives government an opportunity to appraise stakeholders with updates on efforts to deal with leprosy, as well as things being done to monitor progress made at attaining global targets set in that direction.

According to Mamora, leprosy is a mildly infectious disease, known by its slow multiplying bacteria, with an incubation period of about five years, while its symptoms may take as long as 20 years to appear.

The National Director, Leprosy Mission Nigeria, Dr. Sunday Udoh said the group will be launching its knowledge-driven chemoprophylaxis Pilot Programme (PEP) in the six geographical zones of the country in order to accelerate efforts towards achieving zero transmission of the disease by 2035.
Health Nigeria This Day