Archbishop Kaigama On Christians And Muslims in Nigeria 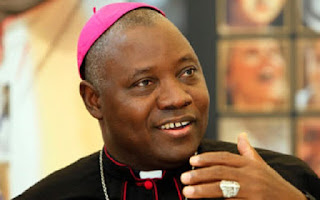 ABUJA (VATICAN NEWS)--The Archbishop of Abuja, Ignatius Kaigama, has called on Christians and Muslims to show genuine respect and mutual acceptance towards each other’s beliefs.

“Even though our practice of religion in Nigeria is quite laudable and impressive, we must be careful to check that it is devoid of externalism and fanaticism, whereby we tend to be judgmental of others and try to see the speck in the eyes of others but not the log of wood in our eyes! Let us face it. We have two major religions in Nigeria: Christianity and Islam. We also have minority indigenous or tribal religions devoted to and contented mainly in performing their ancestral rituals and sacrifices. They have no ambition for territorial expansion or conquest or struggle for numerical supremacy. What they don’t want as they perform their rituals is for anyone to intrude into their sacred space or to violate their cultural norms and tenets,” said Archbishop Kaigama.

Mutual respect is the key

The Archbishop said the problem with religious practice was the failure of genuine acceptance and mutual respect of each other especially by the adherents of Christianity and Islam. Most of the excuses given for hate have nothing to do with the faith but rather the craving for dominance and supremacy. This manifests itself in the misuse of power or economic resources with the view to get things done in favour of one’s religious group.

Do not indoctrinate children
Archbishop Kaigama decried the teaching of hate to children.

“There is also the case of indoctrination whereby children in families and schools are made to hate others who are of different religious views and practice and to call them derogatory names. Such indoctrination sticks so much that it becomes so difficult to overcome later in (one’s) adult life. This, unfortunately happens instead of instilling or propagating healthy ideas that favour the cross fertilisation of religious values. With this, children grow up with incredibly deep-seated religious prejudices against members of the other religion. Is it any wonder that simple matters whether of a social, economic or political nature soon become so complex and evolve into unhealthy religious propaganda with attendant violence and the unfortunate loss of lives?” the Abuja prelate wondered.

Interreligious dialogue for peace
Archbishop Kaigama made the remarks in Abuja, Nigeria at a KAICIID and Interfaith Dialogue Forum for Peace (IDFP) event, late last week.

About 150 participants attended the conference. Also present were the President of the Christian Association of Nigeria, Rev. Dr. Samson Ayokunle; the Sultan of Sokoto, Alh. Muahammad Sa’ad Abubakar; the Emir of Kano, Muhammadu Sanusi II among other dignitaries.

The theme of the conference was, “Interreligious Dialogue: Strengthening the Culture of Peace, Justice and Reconciliation."