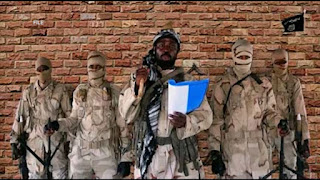 Jihadists in northeast Nigeria have released a video showing the execution of two soldiers and a policeman, posted online late Monday by the Islamic State group (IS) propaganda agency Amaq.

The video, dated Sunday, was made by a branch of Boko Haram that has sworn allegiance to IS known as the Islamic State Group in West Africa (ISWAP).

Its release came days after the militants announced the kidnapping of 14 people including two aid workers and, according to the jihadists, six members of the security forces.

It shows three men in plain clothes kneeling in a field, introducing themselves as members of the Nigerian security forces before masked men in fatigues open fire on them shouting "Allahu Akbar" (God is greatest).

"We tell the Nigerian army that we will never spare those fighting against the people who follow Allah's religion," one of the executioners said in Hausa, a language widely spoken in the north of the country.

"We will attack your bases and confront you on your routes," the militant added, shortly before the execution.
Boko Haram Islamic Jihadists Islamic State Nigeria