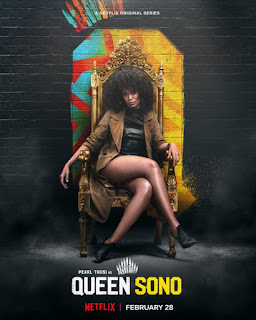 The teaser shows Thusi walking up and taking a seat on the throne shown in the poster. She ends the teaser by giving a wink.

Queen Sono is a crime drama set in South Africa. The series follows Queen Sono (Thusi), a highly-trained spy who must juggle dangerous missions with changing relationships in her personal life.

"We are delighted to create this original series with Netflix, and are super excited by their undeniable ability to take this homegrown South African story to a global audience. We believe Queen Sono will kick the door open for more awesome stories from this part of the world," Lediga said at the time.

Thusi is known for playing Patricia Kopong on the BBC/HBO series The No. 1 Ladies' Detective Agency and Dayana Mampasi on the ABC series Quantico.