Person Diagnosed With Monkeypox In England After Visiting Nigeria 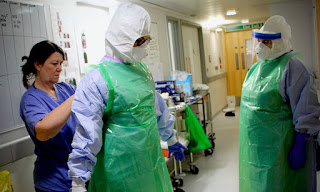 Medics at Royal Liverpool hospital prepare for contact with one the monkeypox patients. Photograph: Royal Liverpool and Broadgreen University Hospitals NHS Trust. Image via The Guardian

LONDON (THE GUARDIAN)--A person is being treated for monkeypox in England, a rare viral infection similar to the eradicated disease smallpox, public health authorities have confirmed.

Public Health England (PHE) says monkeypox is not very transmissible and the patient is not thought to pose a risk to other people. He or she – their identity has not been revealed – is thought to have contracted it during a visit to Nigeria.

PHE is getting in touch with people who may have been in contact with the patient as a precautionary measure, including those who travelled to the UK on the same flight. It says they will be given appropriate advice and be monitored if necessary.

“Monkeypox does not spread easily between people and the overall risk to the general public is very low. We are following up with those who have had close contact with the patient to offer advice and to monitor them as necessary,” said Dr Meera Chand, consultant microbiologist at PHE.

“PHE and the NHS have well-established and robust infection control procedures for dealing with cases of imported infectious disease and these will be strictly followed to minimise the risk of transmission,” she said.

The individual was in south-west England when they fell ill and was transferred to the high consequence infectious disease centre at Guy’s and St Thomas’ NHS Foundation Trust in London.

There were three cases of monkeypox in the UK in September last year. The first was a resident of Nigeria who was staying at a naval base in Cornwall. There was no link to the second case, it was said at the time, even though that person had also spent time in Nigeria. The third was a healthcare worker involved in the care of one of the patients at Blackpool Victoria hospital before the infection was identified.

Last year PHE said there had been a sustained outbreak of monkeypox in Nigeria in September 2017 and that it was expected the virus would continue to circulate there.

Monkeypox is a rare viral disease which does not easily spread between humans and is usually self-limiting, meaning people recover within a few weeks. Sometimes, however, they become severely ill and it can be fatal in up to 10% of cases.

Initial symptoms include fever, headache, muscle aches, backache, swollen lymph nodes, chills and exhaustion. A rash can develop, often beginning on the face, then spreading to other parts of the body. The rash changes and goes through different stages before finally forming a scab, which later falls off.
Health London Newsroom Nigeria The Guardian
Reactions: