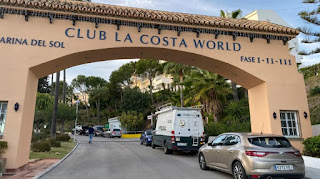 A civil guard van is parked at the entrance of the Club La Costa World holiday resort near Malaga, Spain. Credit: AP


A British father and his two children who drowned in a swimming pool at a holiday resort in the Costa del Sol have been named.

Gabriel Diya, 52, his daughter Comfort Diya, 9, and his son Praise-Emmanuel Diya, 16, are understood to have died in the triple tragedy on Christmas Eve.

Mr Diya's Facebook account lists him as a manager of Open Heavens London, a Christian religious group with origins in Nigeria, based in Charlton, south-east London.

It is understood Mr Diya and his daughter are both British, while his son is American.

The three family members were found unresponsive in a swimming pool at Club La Costa World on Christmas Eve, a statement from holiday operator CLC World Resorts and Hotels said.

The incident occurred after the nine-year-old girl got into difficulties in the water and her brother, 16, and father, 52, attempted to rescue her, it has been reported.

According to Spanish journalist Fernando Torres, police divers on Tuesday found nothing wrong in the pool but investigations continue.

It is believed the divers have been inspecting the pool and its pump, but so far it is not known what caused the tragedy.

Mr Torres added a janitor, who he says was the first to jump into the pool to rescue them, found it difficult to get back out.

Operator CLC World Resorts and Hotels said in a statement: "The Guardia Civil have carried out a full investigation which found no concerns relating to the pool in question or procedures in place, which leaves us to believe this was a tragic accident which has left everyone surrounding the incident in shock.

"Naturally, our primary concern remains the care and support of the remaining family members; we would therefore request that their privacy be respected at this traumatic time."

A holidaymaker staying at the resort, which is near the town of Fuengirola, said she saw "bodies covered in white sheets" by the side of the pool, and could hear "a woman crying aloud".

Tanya Aamer, 23, from Birmingham, said: "The atmosphere as I was walking past is indescribable.

"Obviously we've never been in that situation before so we kind just began walking slowly in a slight state of confusion as to what we're witnessing and eventually when we got to the bottom it was just silent, no talking or anything."

CLC World Resorts and Hotels said management were assisting the authorities "fully" with an investigation into the deaths at the resort.

The statement said: "Management at Club La Costa World resort would like to offer its heartfelt condolences to the family affected by the loss of three family members on December 24 2019.

"The guests were found unresponsive in one of the resort's pools.

"The management are assisting the authorities fully with their investigation into the deaths.

"We would like to thank our first response team and the emergency services for their quick and appropriate responses, and our staff for the continuing support of the family at this difficult time."

A spokesman for the Foreign and Commonwealth Office said: "We are offering assistance to a British woman following an incident in Spain."
England Nigeria Spain