The Endless Walk Towards Africa’s Liberation 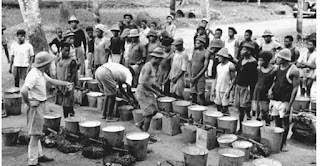 Africans working at the European rubber industry during the colonial era, but today, we are in a modern diplomatic slavery

In West Africa, as well as in most parts of East and Central Africa, export products were mainly produced on the farms of the Africans themselves. European plantation production did not take root there due to climatic conditions difficult for Europeans.

The main exploiters of the African manufacturer were foreign companies. Agricultural exports were produced on farms owned by Europeans located in the Union of South Africa, Southern Rhodesia, parts of Northern Rhodesia, Kenya, and southwest Africa.

To force a large number of Africans to leave the village every year and go to work, the administration of the settlement colonies artificially created land hunger, limiting the areas of residence of individual ethnic groups to reserves.

The exploitation of the African population could not be carried out without some form of involvement of its representatives in management. The colonial authorities created with their participation a new administrative apparatus or used elements of the pre-colonial era.

This was done not only because of the shortage of colonial European officials but also because of the need to reduce the cost of the colonial apparatus. Without any, minimal social support among the local population could be exploited only by resorting to constant military coercion and control.

A variety of ways to attract Africans to colonial rule basically came down to two forms: direct and the so-called indirect management. In the first case, the colonial administration appointed African leaders to a particular region, disregarding the local institutions of power and the origin of the applicant.

Under an indirect management system, the colonialists formally retained the institutions of power that existed in pre-colonial times, completely changing, however, their content.

The direct control system was more often used in the French colonies, indirect - in the English. But this was not at all an invariable rule. The French in many cases, not only informally, but also formally recognized the power of influential traditional rulers, especially those who actively collaborated with them.

The British often created institutions of supposedly traditional power completely artificially, an example is that among the Igbo people in Eastern Nigeria. And indirect control was incompatible with the settlement colonialism of Kenya, Southern Rhodesia, South Africa, and the British themselves admitted that they used direct control in these countries.

One thing which is clear is, whether slavery has come to an end, the foundation of colonialism has been uprooted or Apartheid has been dismantled, Africa will never be free since developed countries are still parasites or vampires sucking the blood of Africans to sustain their economies.

Recently, Russian President Vladimir Putin said some Western countries have resorted to intimidation and blackmailing African governments to regain lost influence and dominant positions in former colonies. The Russian president said this in an interview with TASS.

According to Putin, in such ways, they strive already in the new wrapper, to pump out super profits, to exploit the African continent without regard to the people living here, and to environmental and other risks."

In this regard, the president is sure, these Western countries impede the rapprochement between Russia and Africa. “It is likely that no one would interfere with such a policy,” the head of state suggested. What does that mean to African leaders?

Because they are aware of some leaders, such as Thomas Sankara, who was assassinated for trying to liberate his country from the West but this shouldn’t prevent them from finding solutions to external problems drastically affecting the growth of Africa.

Twenty-two Japanese firms are presently in the country on an investment opportunities seeking mission. This was disclosed, on Tuesday, by Nigerian Ambassador to Japan, Godwin Agbo, when he led a Japanese trade mission to the Minister of State for Trade and Investment, Dr Samuel Ortom. He said the visit was in response the federal government's foreign investment drive which was meant to stimulate economic growth and job creation.