IS Claims Responsibility For Deadly Mali Attacks On 50 Soldiers 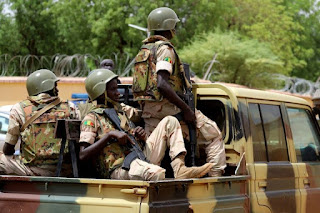 BY BY AGENCE FRANCE-PRESSE

The Islamic State on Saturday claimed responsibility for a devastating raid that killed 49 Malian troops as well as a blast that led to the death of a French soldier who became the latest casualty in the conflict-torn region.

The strikes underscored the fragility of an area straddling several West African countries battling increasing jihadist violence that has claimed hundreds of lives.

“Soldiers of the caliphate attacked a military base where elements of the apostate Malian army were stationed in the village of Indelimane,” the IS said in a statement on its social media channels.

On Saturday, French corporal Ronan Pointeau, 24, died after an armoured vehicle in which he was travelling hit an improvised explosive device (IED) near the city of Menaka, a French defence ministry statement said.

The IS late Saturday also claimed responsibility for that, saying its fighters had “detonated an explosive device on a French army convoy in the Indelimane area”.

Pointeau and his colleagues were escorting a convoy between the cities of Gao and Menaka.

“This insidious attack shows the importance and bitterness of the fight against armed terrorist groups” in the border region straddling Mali, Niger and Burkina Faso, the French defence ministry said.

President Emmanuel Macron paid tribute to Pointeau and expressed solidarity with the French and African troops fighting in the region.

The Malian government initially said 53 people died in what it described as a “terrorist attack” at Indelimane.

An army officer said troops arrived at the outpost around 5:00 pm on Friday and “took back control of our positions.

“The terrorists carried out a surprise attack at lunchtime. Army vehicles were destroyed, others taken away,” he told AFP.

The attacks came a month after two jihadist assaults killed 40 soldiers near the border with Burkina Faso. Several sources have said the real death toll was higher.

MINUSMA, the UN mission in Mali, condemned the raid and said its peacekeepers were helping Malian troops secure the region.

– ‘We can resist’ –
“This bloodshed that Mali has been living through cannot go on,” imam Mahamound Dicko, an influential religious leader in Mali, said.

“Do you want us to resign ourselves to this suffering? We can resist,” he added.

“If Africa does not mobilise for Mali and Burkina (Faso), it won’t be spared the bushfire that is quickly catching West Africa’s coastal countries, the next chosen targets” of the jihadists, he said.

The violence has also spilled over into Burkina Faso and Niger where extremists have exploited existing inter-communal strife, leaving hundreds dead.

In Mali, the attacks have spread from the arid north to its centre, an ethnically mixed and explosive region.

The recent assaults are a humiliation for the so-called G5 Sahel force — a much-trumpeted initiative under which five countries created a joint 5,000-man anti-terror force — and for former colonial ruler France, which is helping to bring security to the fragile region.

Northern Mali came under the control of Al-Qaeda linked jihadists after Mali’s army failed to quash a rebellion there in 2012.

A French-led military campaign was launched against the jihadists, pushing them back a year later.

But the jihadists have regrouped and widened their hit-and-run raids and landmine attacks to central and southern Mali.
AFP Islamic State Mali West Africa