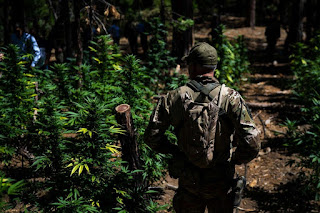 Law enforcement agencies working together in the Campaign Against Marijuana Planting program arrested 148 people and seized 168 weapons during this year's raids, up from 52 arrests and 100 firearms confiscated during last year's growing season.

"Illegal cannabis grows are devastating our communities," Becerra said. "Criminals who disregard life, poison our waters, damage our public lands, and weaponize the illegal cannabis black market will be brought to justice."

Growing marijuana was legalized by Proposition 64, which was approved by California voters in 2016. State residents 21 years and older could immediately grow up to six plants for personal use, while larger farms were required to get a state license starting Jan. 1, 2018, pay taxes and license fees and track every plant harvested and sent to pot shops.

But illegal pot farms have continued operating — California is the largest supplier of marijuana to the rest of the country and it is illegal to sell cannabis outside the state from licensed California farms. A new study by the research group New Frontier Data estimates that California produces 58% of the cannabis grown in the United States.

Becerra said the black market persists in part because criminal growers can sell marijuana more cheaplythan licensed growers because they don't pay fees and taxes, or meet the costly environmental standards, that are required of licensed cultivators.

"The illicit cultivation of marijuana continues to be a major problem in California," said Douglas Herrema, the manager of the Palm Springs field office for the U.S. Bureau of Land Management.

CAMP is the state's main coordinated enforcement effort, while other agencies have separately raided and seized illegal marijuana grows.

"These illegal marijuana grows destroy wildlife and wreak havoc on our land and water, ultimately impacting the communities where we live," Bodner said during a Monday press conference with Becerra in Los Angeles.

Many of the illegal growing operations are the work of Mexico-based drug trafficking organizations in remote areas including national forest lands, officials said.

Gangs that operate illegal pot farms can be violent. Last month, an El Dorado County sheriff's deputy was killed in a shootout with illegal growers at a site in Somerset in Northern California, the attorney general noted.

"Those grows threaten our public safety and our public health and our environment," Becerra said, noting that this year's raids occurred in 35 of California's 58 counties.