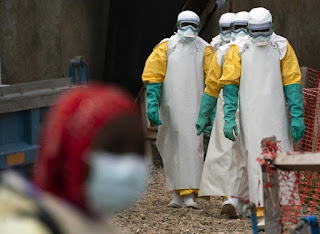 In this Tuesday, July 16, 2019 file photo, health workers dressed in protective gear begin their shift at an Ebola treatment center in Beni, Congo DRC. The World Health Organization says the ongoing Ebola outbreak in Congo still warrants being classified as a global emergency, even though the number of confirmed cases has slowed in recent weeks. (AP Photo/Jerome Delay, File)

LONDON (AP) — The World Health Organization says the ongoing Ebola outbreak in Congo still warrants being classified as a global emergency, even though the number of confirmed cases has slowed in recent weeks.

The U.N. health agency first declared the epidemic, the second-deadliest Ebola outbreak in history, to be an international emergency in July. On Friday, it convened its expert committee to reconsider whether the designation is still valid and decide if other measures are necessary.

WHO’s director-general, Tedros Adhanom Ghebreyesus, said the situation remains “complex and dangerous” and that officials must continue to treat every case like it’s the first.

“Every case has the potential to spark a new and bigger outbreak,” he told reporters.

To date, there have been 3,113 confirmed cases and more than 2,150 people have died since the epidemic was first reported last August.

While only 15 new Ebola cases were confirmed last week, WHO noted the vast majority were not in people previously identified as contacts of others infected, suggesting health officials still have difficulty tracking where the virus is spreading.

WHO also said nearly a third of people are dying outside of Ebola treatment centers, potentially exposing families and loved ones to the disease.

“When your new cases are not coming off your contact list, that means you don’t have things under control,” said Dr. Armand Sprecher, an Ebola specialist at Medecins Sans Frontieres, or MSF.

Sprecher lamented that attempts to build trust among the wary local population are still failing. “We have not communicated very well over the last year, so can we really do this now? I don’t know.”

Efforts to curb the outbreak have been hampered by violence against health workers — some have been killed — and some local residents suspect international responders of transmitting Ebola rather than stopping it. Misunderstandings have been high in communities that had never experienced the disease before.

This is also the first Ebola outbreak to unfold in what has been called a war zone. Eastern Congo is home to numerous armed groups, and their attacks have halted response efforts many times, interrupting efforts to vaccinate people and monitor suspected cases.

This outbreak is second only to the 2014-16 Ebola epidemic in West Africa that left more than 11,300 people dead.
Africa AP News Congo Ebola Health