The True Strengths Of Sub-Saharan Africa 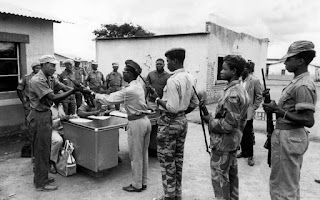 Karavia, March 1963: UN soldiers collect the weapons of soldiers in Katanga. The independence-seeking province was forcibly reintegrated into the Democratic Republic of the Congo following the intervention of UN troops (source: dpa)

BY PRINCE MICHAEL OF LIECHTENSTEIN


Botched decolonization in the 20th century has saddled sub-Saharan Africa with the nation-state concept and social designs that are alien to its indigenous societies. The result is the twin scourge of perennial conflict and economic weakness. The outside world should rethink its stand on the decentralization of African states and stop ill-conceived attempts by the UN, the international community and especially NGOs to “fix” the purported problem of large African families.

The state borders defined during colonization in the 19th century by the European powers ignored ethnic areas. Then, in the 1950s and early 1960s, the colonies were forced to transit into national independence inside these artificial boundaries. The process was hasty and ill-managed. The thinking at the time was that nation-states should be established in Africa despite the damage nationalism had brought to Europe. “Nation-building” was the buzzword.
Tragic mistakes

The international community, especially the United Nations, had little patience for ethnic areas that wanted independence from artificial states. In the Democratic Republic of the Congo, UN troops are still helping to crush independence movements today. In the early 1960s, Congo, which was well administered by Belgium, was one of the first African countries urged into independence. Belgium and its colony were subjected to international pressure to hasten the process. Then, when the prosperous Katanga province declared independence from the brutal new regime which imposed itself in Kinshasa, UN troops committed atrocities while subduing resistance.

The Biafran War in Nigeria (1967-1970) produced a similarly disastrous result, as most of the international community supported Nigeria in its crusade against the freedom of the Igbo ethnic group. About two million people were killed then, half of them children, either directly or by starvation. The nation-state is considered holy, regardless of the catastrophic consequences of trying to make it a reality.

Tribalism is widely perceived as Africa’s underlying problem. More realistically, however, one should say that octroyed nationalism in artificial states is at the root of the continent’s drama, breeding violence and corruption.

Large families are the most durable societal base of stability

Some thinkers and African leaders are conscious of this issue. One of such leaders is Paul Kagame, the president of Rwanda, who has led his civil war-torn country to become probably the most successful one on the continent.

Obviously, more autonomy is needed in tribal areas. If one wants to preserve the present “national” boundaries, the political role of tribal leaders must be strengthened. Governance models with a powerful senate, where each ethnicity has the same representation regardless of its size, could be an answer. More ethnic and regional subsidiarity is also necessary. Ethnic ties are strong, even in areas with multiethnic populations. Tribal affiliation is an essential building block of strength and stability in Africa.

The other such element is family. Its circles are far-flung, consisting of not only parents and children. Monogamy and polygamy are both accepted in many African countries. National governments, supranational organizations and NGOs are ignoring this reality as they intervene in the autonomy of families and try to nudge them into “family planning.” Large families, however, are the most durable societal base of stability and children are needed for social security. (We should note that in the European welfare states, the social security systems, especially retirement schemes, are on the way to collapse because too few children are born.) Many in Africa believe that family planning programs implemented there amount to a form of neocolonialism – a view that seems amply justified. Without the governance problems created by failed nation-states, the African continent could nourish a much larger population.

Robust ethnic and family structures, not weakened by ill-conceived interventions from nation-states and international agencies, would be the best hedge against the large-scale emigration, which saps Africa of some of its best talent, and creates problems in Europe and tragedies in the Mediterranean.

New technologies that require no state involvement to implement, for example, communications, are a blessing for Africa. Arbitrary national borders do not limit their use. Also, institutions, which are weak in most African countries, do not stand in the way of agile development. As a result, the continent is now a global leader in the sector of digital payment systems. Robust social media widely replace the old arrangement of government information monopoly and complacent journalism. Such technologies help strengthen the ethnic and supranational elements, to Africa’s advantage.