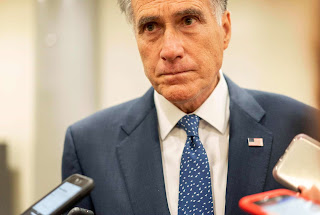 WASHINGTON (THE WASHINGTON POST) -- Sen. Mitt Romney delivered perhaps the most thorough Republican rebuke of President Trump’s Syria withdrawal Thursday, calling Trump’s abandonment of the Kurds there “a bloodstain on the annals of American history.”

But while that line will get a lot of play, there’s something else Romney said that shouldn’t escape notice. He also floated a theory about how Trump arrived at the decision: that he got bullied into it by Turkey and that he backed down.

“It’s been … suggested that Turkey may have called America’s bluff, telling the president they are coming no matter what we did,” said Romney, of Utah. “If that’s so, we should know it. For it would tell us a great deal about how we should deal with Turkey, now and in the future.”


Romney then returned to the idea that Turkish President Recep Tayyip Erdogan might have given Trump an ultimatum that was met with acquiescence.

“Are we so weak and inept diplomatically that Turkey forced the hand of the United States of America? Turkey!?” Romney said. “I believe that it’s imperative that public hearings are held to answer these questions, and I hope the Senate is able to conduct those hearings next week.”

To be clear, there have been suggestions that perhaps Trump got rolled by Erdogan, who has been pitching the idea that Turkey could take over the fight against ISIS in northern Syria for a long time. The possibility that Trump gave away the farm because Erdogan was particularly convincing or because of something else — Trump’s business interests in Turkey, his desire for Middle East withdrawals, etc. — is a well-trafficked theory among Trump’s opponents.

But here is a U.S. senator — and a Republican one — suggesting not just that Trump got out-negotiated, but that he basically got told what was going to happen and ran away. Romney is entertaining the idea that a relatively small country forced the hand of the United States and also dictated to the supposed Dealmaker-in-Chief.

It’s important to emphasize that this is speculation. But it’s also not that far-fetched.

Trump spoke with Erdogan the day he abruptly announced the withdrawal. He also may be entering his final year as president, and Turkey has long wanted to go after the Kurds in northern Syria. If you’re Erdogan, you know that the next president almost definitely won’t be so amenable to your plans for the region. You’ve also been pitching this idea more softly for two years without getting your desired U.S. withdrawal. So why wouldn’t you eventually play this card? It might be a bluff that Trump could call and you’d come to regret, but it might also be your last, best chance to get a compliant U.S. president. And this is an issue of major emphasis for Turkey, which views Syria’s Kurdish fighters as terrorists who constitute a clear and constant threat to it.

Romney, at least, seems to think this might have indeed been what happened, and now he’s calling for hearings on it. Other Trump critics have called for the release of what Trump and Erdogan said on that call, similar to the release of the call with Ukraine’s president.

The White House certainly won’t want to disclose what was said. But we’ve seen with Ukraine that pressure can force disclosure. And at the very least, it seems fair to ask whether Turkey threatened to invade whether U.S. forces were there or not.
Associated Press Donald Trump Turkey United States