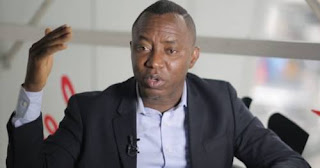 
An activist and founder of a pro-democracy news website who lives in Bergen County has been imprisoned in Nigeria for 86 days.

Now his small community is getting vocal about bringing him home safely.

Omoyele Sowore, 48, was arrested in Nigeria Aug. 2 after he called on others to protest against the African nation’s president, CNN reported. Sowore lives in Haworth with his family but was visiting his native country of Nigeria when he was arrested, NorthJersey.com reported.

His family and borough residents will gather at Haworth Borough Hall on Monday, Oct. 28 at 6 p.m. to bring attention to his situation in the hopes of getting him back to New Jersey.

Sowore is also the founder of Sahara Reporters, a news website that covers Nigeria from the safety of New York. He has been an outspoken critic of Nigerian President Muhammadu Buhari, who Sowore unsuccessfully ran against in the country’s election last year.

He pleaded not guilty in September to charges including treason, money laundering and cyberstalking for allegedly sharing false information about Buhari. A court denied a request by state security to keep Sowore jailed pending the charges, but he has not yet been released, Reuters reported.

The U.S. Department of State was not immediately available for comment Saturday evening about Sowore’s situation.

“Sowore has dedicated his life striving for a Nigeria that works for all of its citizens regardless of socio-economic background, religion or ethnicity,” the Haworth demonstration organizers wrote in a statement. “He has been unfairly detained and will go on trial for treason in early November for organizing a peaceful protest to end corruption, advocate for economic equality and guarantee education to all Nigerians."