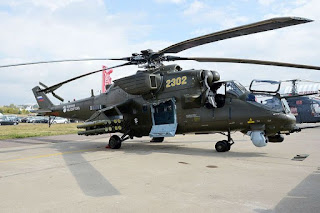 
The Nigerian government will hold discussions with the Russian government over the procurement of additional attack helicopters.

An aide to Nigerian President Muhammadu Buhari told reporters in Abuja this week that President Buhari will raise the issue of the attack helicopters with his Russian counterpart, President Vladimir Putin, during the Russia-Nigeria Summit that will take place from October 23 to October 25. The aide, Malam Garba Shehu, noted that the weapons procurement negotiations focus on strengthening Nigeria’s counterinsurgency capabilities, particularly to support efforts against Boko Haram in the northeast.

Shehu said, “I think that this visit presents a unique opportunity for our two presidents to sit down and discuss particularly weapon procurement including of course helicopters which Russians can supply and would be useful to Nigeria towards ending the insurgency particularly in the northeastern part of the country.”

He added, “So, I believe that arms procurement to which the Russians are favourably disposed of will form a big part of this conversation.”

Further details on procurement will be made available in the future, Shehu said.

The Nigerian government currently has on order 12 Mi-35M attack helicopters from Russia. Nigeria placed an order for the helicopters in 2015 and began taking delivery of them in December 2016. Earlier this month, Nigerian Ambassador to Russia Steve Davies Ugbah confirmed in an interview that six have been delivered to date.

The contract for the first 12 Mi-35Ms came before the U.S. put a new sanctions law into place. That law, the Countering America’s Adversaries Through Sanctions Act (CAATSA), places sanctions on the Russian defense industry, as well as customers of Russian defense firms. While the U.S. has offered some countries waivers to enable them to procure Russian military equipment, Abuja is leery of getting ensnared in the sanctions regime.

Ambassador Ugbah emphasized in the interview that Russian assistance has been crucial in fighting terrorist groups in Nigeria. He said that “without Russian help, without Russian technology, the fight against terrorists in my country will face very big challenges.”

Besides Russian-made equipment, the Nigerian military is procuring AW109M helicopters from Italy. Chief of Air Staff Air Marshal Sadique Abubakar said on Monday that a pair of the helicopters should be delivered before the end of this year.

Whew, yes, it's summer time and I'm just having a blast. Guess what? It's Leimert Park week and the showdown is few days away. The line up, too, is interesting. First, I ran into Swiss-based Congolese model, Songia Poupee, whose concept of a new women's handbag had been on display at African Treasures Gallery bargained on Melrose Trading in Hollywood, attracting curious-minded businessmen with the possibilities of funding to promote an exceptionally, unique, creative product which should be popping up on the runway sooner or later, here in Los Angeles. We spoke at length and the elegantly dressed Poupee told me she had came up with the idea in order to put something entirely different out there in the fashion world. The handbag is a three set piece clutched together in different colors with the larger part in Leopard skin hanging on a gold-plated chain. Leimert Park, off the Crenshaw thoroughfare in the Black Township, and a place to hang out on Mondays especially wi