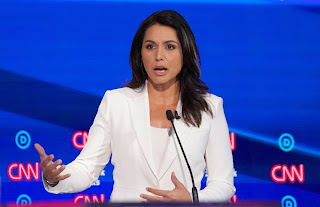 During a podcast appearance on "Campaign HQ" with David Plouffe, the former secretary of state and 2016 Democratic presidential nominee did not mention the Hawaii congresswoman by name, but said she believes the Russians have "got their eye on somebody who's currently in the Democratic primary and are grooming her to be the third party candidate."

"She's the favorite of the Russians," Clinton said. "They have a bunch of sites and bots and other ways of supporting her so far. And that's assuming Jill Stein will give it up, which she might not because she's also a Russian asset."

The Russians know they can't win without a third party candidate, Clinton added.

Earlier in the interview, she also called President Donald Trump "Vladimir Putin's dream." She goes on to say that Trump's inauguration speech was "like a declaration of war on half of America."

Gabbard's campaign did not immediately respond to requests for comment, though Gabbard did respond to similar criticism during the Democratic debate in Ohio earlier this week. "This morning, a CNN commentator said on national television that I'm an asset of Russia," Gabbard said on stage. "Completely despicable."
Associated Press Politics Society