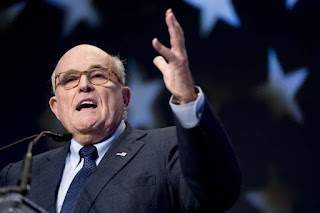 WASHINGTON (POLITICO) -- A photograph of President Donald Trump posing with a recently indicted associate of Rudy Giuliani was posted online in April 2014, two years prior to what had been their first known interaction.

In the photo, Trump and Lev Parnas stand shoulder to shoulder, smiling at the camera at what appears to be an outdoor nighttime event. Trump wears a white, Trump-branded cap and white shirt under a jacket. Parnas wears a royal blue collared shirt. The circumstances of the meeting captured in the photograph remain unclear.

Two weeks earlier, on March 14, Jaros posted, “Shout out to my ukranian boss and brother Lev Parnas thank you for eberything you and your team doing for me, i cant repay you enough!!!!!!!! and i want to meet the donald soon!!!!!!”

That post suggests the meeting captured in the photo was not a chance interaction, and that Parnas had discussed his access to Trump with Jaros.

Trump has sought to distance himself from Parnas, the Florida businessman at the center of a ballooning scandal over illicit foreign influence in his administration and, more broadly, the American political system. But the photograph and post provide further evidence that the two men are more closely tied than Trump has let on.

Jaros is an itinerant musician and music producer, who has worked in Fort Lauderdale, Florida; Queens, New York; Atlanta and Minneapolis, according to his LinkedIn profile.

The profile also describes it as his job to "negotiate and close deals centered on gold oil, rough diamonds" for a business called Gabriel and Jaros Holdings.

Jaros did not immediately respond to requests for comment made over social media. A lawyer for Parnas, John Dowd, said he did not know anything about the photographed interaction and declined to answer further questions.

Following the unsealing of Parnas’s indictment last week for campaign finance violations over alleged schemes to buy political influence on behalf of foreigners, Trump said he did not know Parnas or his business partner and co-defendant, Igor Fruman. “I don’t know those gentleman,” he told reporters before boarding Marine One en route to a campaign rally in Minneapolis. “Maybe they were clients of Rudy. You’d have to ask Rudy.”

On Thursday, the Wall Street Journal described Parnas’s attendance at a Trump campaign fundraiser attended by the candidate and Giuliani in October 2016 as “his first known appearance in Mr. Trump’s circle.” Parnas, 47, told the Washington Post that he sold Trump Organization condos while Trump’s father, Fred, was still running the business.

POLITICO reported on Friday that the French newspaper Le Monde interviewed Parnas at the Trump campaign’s invite-only election night party in 2016, and that Parnas described himself to the paper as a friend of Trump’s.

Those are not Parnas’s only ties to the campaign. His son, Aaron, volunteered for the Trump campaign in Florida in 2016, according to a 2017 profile in the Palm Beach Post.

A man answering the phone at a number listed for Aaron Parnas hung up after hearing they had been reached by a reporter. The person did not respond to follow-up text messages.

Spokespeople for the White House and the Trump re-election campaign did not immediately respond to requests for comment. Susan Wiles, who co-chaired Trump’s 2016 campaign in Florida, also did not respond to a request for comment.

Marc Caputo contributed to this report. 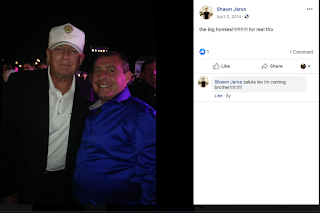