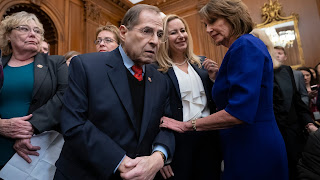 
Or maybe there is no inquiry at all. At this point, it’s hard to say, in part because House Democrats offer different, often-strained answers to a straightforward question: Has the House begun an impeachment investigation of President Trump?

As House Speaker Nancy Pelosi (D-Calif.) has taken a hands-off approach to what Judiciary Committee Chairman Jerrold Nadler (D-N.Y.) in August labeled an impeachment inquiry, rank-and-file House Democrats have found themselves engaged in semantic battles over what exactly the House is doing on impeachment. You can watch examples of the various descriptions by Democrats of the status of impeachment in the video above.

The committee is scheduled to meet at 8 a.m. Thursday to vote on a resolution to expand its investigatory options to include rarely used procedures to look into Trump.

“We’re holding hearings for the purpose of investigating the possibility of voting [on] articles of impeachment,” Nadler told NBC News this week.

On Monday morning, a second member of the House Judiciary Committee, Rep. Debbie Mucarsel-Powell (D-Fla.), told CNN that it was “no secret” that the committee was conducting an impeachment investigation.

Later on Monday, a third member of the committee, Rep. Steve Cohen (D-Tenn.), said Thursday’s vote would “formalize having an impeachment inquiry.”

And on Wednesday, a fourth member of the committee, Rep. Hakeem Jeffries (D-N.Y.), would not commit that an impeachment inquiry was underway.

“We’re in the midst of a Judiciary Committee investigation,” Jeffries said.

In fact, Nadler’s comments in August acknowledged that House Democrats had started an impeachment inquiry when the Judiciary Committee in July argued in a court filing that it needed the full, unredacted report from former special counsel Robert S. Mueller III because it “is conducting an investigation to determine whether to recommend articles of impeachment.”

Debating where impeachment stands is confusing and jargon-heavy. But Democrats’ semantic contortions this week are significant. They suggest a nonexistent or confusing messaging strategy on impeachment, which is the most serious investigation the House can consider.

The confusion also reflects two more realities for House Democrats: Most Americans and most House lawmakers oppose an impeachment inquiry, even as a majority of House Democrats support one.

Fourteen months before the 2020 presidential election, Democratic leadership does not have its impeachment messaging straight.

“I thought the question was in regards to whether the full House is actively considering articles of impeachment, which we are not at this time,” he said in a statement. “ … I strongly support Chairman Nadler and the Judiciary Committee Democrats as they proceed with their investigation ‘to determine whether to recommend articles of impeachment to the full House,’ as the resolution states.”