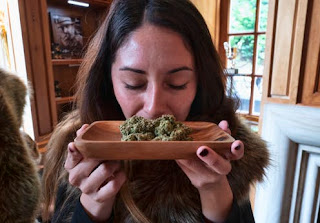 Taking a whiff of the marijuana flower. Image: Richard Vogel via The Conversation.


Illinois recently became the 11th state to legalize marijuana for recreational use. As more states follow suit, legal cannabis spending is expected to grow over 200% from about US$9 billion in 2017 to $31 billion in 2022.

With these unparalleled increases in spending, marijuana stocks, including marijuana exchange-traded funds, with catchy tickers such as YOLO, an acronym for “you only live once,” are becoming more common.

So should people add these stocks to their portfolios?

Investors committed to being socially conscious have more choices than ever and can expect similar returns to traditional investors.

While there is no set definition on what socially responsible investing entails, it goes beyond the fundamental view of Milton Friedman, an iconic economist, who claimed “the business of business is business” – in other words, making money or “profit.”

In addition to profit, socially responsible investing focuses on what is known as the “triple bottom line.” This means that companies also consider “people” and “planet,” as part of responsible business practices.

Scholar David Vogel defines socially responsible investing as “practices that improve the workplace and benefit society in ways that go above and beyond what companies are legally required to do.”

Most people would agree that such companies ultimately cause more social and environmental harm than good.

For instance, fossil fuels, while meeting the demands for a relatively cheap and consistent energy source, unequivocally contribute to air pollution and negatively impact human and environmental health.

The case of tobacco is similar. It is highly addictive and may seriously compromise a healthy and long life.

The case of marijuana

Taking a view on marijuana is more complex. The substance is used both medically and recreationally.

Marijuana use can cause harm, especially when used at a young age. The National Institutes of Health acknowledges that 30% of users develop dependence and withdrawal symptomswith the long-term use of marijuana. It can also lead to long-term and adverse changes to the brain.

However, marijuana also has some health benefits.

Even though marijuana is not recognized by the Federal Drug Administration as a medicine, the National Institutes of Health recognizes chemicals derived from the plant can help increase appetite, decrease pain, inflammation and nausea. The NIH also acknowledges that such derivatives may be useful in treating certain mental illnesses and addictions and some studies have shown it may be a weapon against opioid dependence.

So does owning marijuana stocks raise the same ethical issues as owning stocks in an alcohol or tobacco firm – or are they more like pharmaceutical stocks?

There are gray areas in socially responsible investing. Not all socially conscious investors have the same values, and not all companies create equal amounts of good.

I do think any socially responsible investor should stay away from recreational marijuana stocks due to the potential for addiction coupled with other health risks.

Medical marijuana stocks, on the other hand, appear to have more benefits than harms. When used for medical reasons, the therapeutic benefits seem to outweigh the health risks. In my view, socially responsible investors should feel free to include a medical marijuana stock in their portfolios if it aligns with their values.