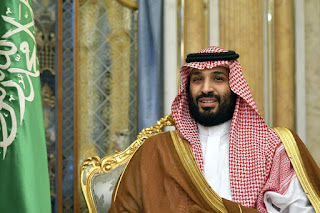 In this Sept. 18, 2019, file photo, Saudi Arabia's Crown Prince Mohammed bin Salman attends a meeting with U.S. Secretary of State Mike Pompeo in Jeddah, Saudi Arabia. The crown prince said in a television interview that aired Sunday, Sept. 29, that he takes "full responsibility" for the grisly murder of Saudi journalist Jamal Khashoggi, but denied allegations that he ordered it. (Mandel Ngan/Pool Photo via AP, File)

NEW YORK (AP) — Saudi Crown Prince Mohammed bin Salman said in a television interview that he takes “full responsibility” for the grisly killing of Saudi journalist Jamal Khashoggi, but he denied allegations that he ordered it.

“This was a heinous crime,” Prince Mohammed, 34, told “60 Minutes” in an interview that aired Sunday. “But I take full responsibility as a leader in Saudi Arabia, especially since it was committed by individuals working for the Saudi government.”

Asked if he ordered the killing of Khashoggi, who had criticized him in columns for The Washington Post, Prince Mohammed replied: “Absolutely not.”

The slaying was “a mistake,” he said.

Khashoggi entered the Saudi consulate in Turkey on Oct. 2, 2018, to collect a document that he needed to marry his Turkish fiancee. Agents of the Saudi government killed Khashoggi inside the consulate and apparently dismembered his body, which has never been found. Saudi Arabia has charged 11 people in the slaying and put them on trial, which has been held in secret. As of yet, no one has been convicted.

A U.N. report asserted that Saudi Arabia bore responsibility for the killing and said Prince Mohammed’s possible role in it should be investigated. In Washington, Congress has said it believes Prince Mohammed is “responsible for the murder.” Saudi Arabia has long insisted the crown prince had no involvement in an operation that included agents who reported directly to him.

In an interview Thursday in New York, Khashoggi’s fiancee, Hatice Cengiz, told The Associated Press that responsibility for Khashoggi’s slaying “was not limited to the perpetrators” and said she wanted Prince Mohammed to tell her: “Why was Jamal killed? Where is his body? What was the motive for this murder?”

“There is no strategic goal,” Prince Mohammed said of the attack. “Only a fool would attack 5% of global supplies. The only strategic goal is to prove that they are stupid and that is what they did.”

Esosa Edosomwan is now everywhere and nobody should blame her for the hard work she’d put in place, because she is not the one to shy away for a testing but strenuous subject matter when it comes to film, television, theater, commercials and modeling. I had decided to put up a series on the beauty pageants for this year’s Miss Africa USA contest when I bumped into Esosa’s profile which revealed she has been selected to represent Nigeria in the electric competition held on Saturday, November 1, 2008, at the Clayton County Performing Arts Center in Jonesboro, Georgia. For the last couple of months, or so, I have searched extensively to near exhaustion just to track the delegates representing their respective countries on the African continent. I had sent Esosa an e-mail requesting an interview, that is, if she was by any chance visiting the Los Angeles area, swapping e-mail, or probably a phone conversation in case she’s been caught up with series of activities in the Big Apple, know

"Don't think the Los Angeles Lakers will make it. With Yao Ming out and the way they've been struggling with the Houston Rockets, I mean, think about it." "Think about what? You mean if Yao Ming had not been injured that it would have been an easy victory for the Rockets?" "Oh, yeah! Can't you tell from the way Rockets are playing, giving the Lakers a run for their money?" "Well, I think the Lakers are the best in the NBA, and I do not care about what you think on how they play. Look, man, this is Hollywood. It's not easy combining both together. Don't you see Jack Nicholson, Denzel Washington, Will Smith, Stephen Spielberg, Ron Howard, Jammie Foxx, and all the heavyweights in da hood cheering for a Lakers victory?" "Really?" "Yep!" That's how it flowed even though I have not been paying much attention to the NBA Finals. Every now and then, I tend to check it out even when I'm