S.African Protests Spread To Cape Town Over Murders Of Women 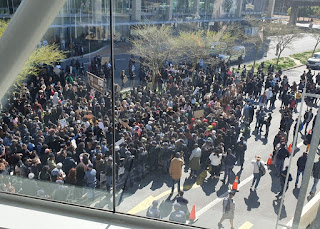 CAPE TOWN, SOUTH AFRICA (BLOOMBERG) -- Hundreds of demonstrators protesting South Africa's high rate of violence against women blocked the entrance to the World Economic Forum on Africa in Cape Town as the event got under way on Wednesday.

The protest was triggered by the murder last week of University of Cape Town student Uyinene Mrwetyana, 19 -- one of the regular incidents of femicide in a nation notorious for its grim crime statistics. A woman is murdered every three hours in South Africa, according to police data.

The killing of Mrwetyana, who was raped and bludgeoned to death at a post office in an upmarket suburb of Cape Town, followed the murder of champion boxer Leighandre Jegels, 25, who was allegedly shot by an ex-boyfriend who had a restraining order against him. Before that, there was Meghan Cremer, an avid horse rider who was allegedly killed by three men as she left her farm outside of Cape Town.

More than a thousand people were involved in the protest, bearing placards including one that simply said, "Stop Killing Us." On Twitter and Facebook, women called for action and suggested ideas including carrying pepper spray and taking self-defense classes, to imposing a curfew on men.

With the country also suffering a spate of deadly xenophobic attacks in its economic hub, Johannesburg, President Cyril Ramaphosa took to Twitter on Tuesday night and, in more than a dozen Tweets, implored citizens to help battle the scourge of violence and femicide.

The word "womxn" has been used in recent years by gender activists to denote transgender women, women of color and as a rejection of the word "women" being derived from, or lesser than, "men."

With the protesters having gathered twice during the day, security teams moved to put up fencing around the conference center's entrances and shut down all but one access point. This meant rerouting WEF delegates and discouraging them from gathering at windows to look at the action in the street.

"We're here to support the women who are victims of sexual violence," Erin Connolly, one of the protesters gathered outside, said as the crowd chanted "how many more."