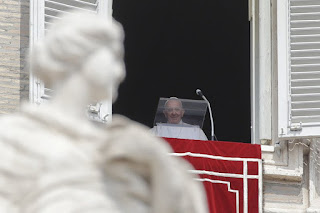 Pope Francis arrives to recites the Angelus noon prayer from the window of his studio overlooking St.Peter's Square, at the Vatican, Sunday, Sept. 1, 2019. Pope Francis says he was stuck for 25 minutes in a Vatican elevator and had to be rescued by firefighters. Francis apologized to faithful in St. Peter's Square Sunday for showing up seven minutes late for his traditional noon appointment with the public. (AP Photo/Alessandra Tarantino)

VATICAN CITY (AP) — Pope Francis on Sunday said he’s giving the Catholic church 13 new cardinals, including two churchmen who have worked to help migrants and several others who toil in poor countries or nations where Christians are a minority.

Francis made the surprise announcement from his studio window overlooking St. Peter’s Square.

Several of his picks come from developing countries, like Cuba, Congo and Guatemala. Two are based in predominantly Muslim countries: Morocco and Indonesia.

“Their provenance expresses the missionary vocation of the Church to continue to announce the merciful love of God to all men on Earth,” the pope said before reading aloud a list of their names.


Ten of the men are under 80 and eligible to vote in any conclave to elect a new pontiff.

The ceremony to formally give the churchmen the red cardinal hat will be held on Oct. 5 at the Vatican.

With Francis’ papacy heavily focused on the needs of those living on society’s margins, including migrants, he chose two men whose clerical careers reflect concerns about immigrations.

One of them is Bologna Archbishop Matteo Zuppi, an Italian who for some 30 years guided the Roman basilica of Santa Maria in Trastevere, whose doors literally have been opened to let the homeless sleep inside on cold winter nights. The basilica is the focal point for a Catholic charity, Sant’Egidio, which runs programs including language instruction for newly arrived migrants, and distributes hot meals and clothing to them.

The other is the Rev. Michael Czerny, a Jesuit like the pope, who is an official who was named in 2016 by Francis to help lead a Vatican office concerned with refugees and migrants. He is a native of what was then Czechoslovakia.

Among the Vatican officials chosen to be cardinals is Bishop Miguel Angel Ayuso Guixot, a Spaniard who is president of the Pontifical Council for Interreligious Dialogue. His resume includes teaching Islamic studies in Khartoum, Sudan, Cairo, Egypt and then at the Pontifical Institute of Arabic and Islamic Studies.
AP News Newsroom Pope Francis Religion Rome
Reactions: