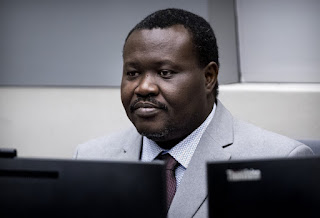 In this Friday, Jan. 25, 2019 file photo, the chief of Central African Republic's soccer federation Patrice-Edouard Ngaissona stands during his initial appearance before the judges of the International Criminal Court (ICC) in The Hague, the Netherlands. Two leaders of a predominantly Christian militia, Patrice-Edouard Ngaissona and Alfred Yekatom, involved in a bitter conflict with Muslim forces in the Central African Republic have appeared at the International Criminal Court for a hearing, that started Thursday Sept. 19, 2019, at which prosecutors are seeking to persuade judges that they have sufficient evidence to send the suspects to trial. (Koen Van Well/Pool photo via AP, File)

Patrice-Edouard Ngaissona and Alfred Yekatom are suspected of involvement in war crimes and crimes against humanity including murder, persecution, torture and the use of child soldiers when they were senior leaders in the anti-Balaka militia. They have not entered pleas.

Prosecutor Kweku Vanderpuye told a three-judge panel at the global court that the crimes followed atrocities by Muslim forces known as the Seleka as they seized power in Central African Republic in 2013, forcing President Francois Bozize to flee into exile.

Vanderpuye alleged that Ngaissona was an influential leader of the anti-Balaka group and Yekatom a military leader who called himself Rambo and commanded thousands of fighters drawn from the ranks of local self-defense groups.

“From exile, Mr. Ngaissona and other members of Bozize’s inner circle used these groups,” Vanderpuye told judges. “They exploited the vengeance and hatred felt by the people to create a formidable fighting force which could defeat the Seleka, opening the way for them to reclaim power.”

However, the anti-Balaka did not limit themselves to fighting Seleka forces and instead “relentlessly terrorized” Muslim civilians as well, he said.

The prosecutor told judges that the anti-Balaka fighters used child soldiers to commit atrocities, recounting the story of one former child soldier who told prosecutors he was ordered to stab or cut off the ears of Muslim prisoners.

“When the prisoner was exhausted we would dig a shallow grave about knee height, put him in and then the chiefs will come back and kill him,” Vanderpuye said, quoting the former child soldier.

Ngaissona, who was chief of Central African Republic’s soccer federation when he was arrested on an ICC warrant in Paris last year, faces 111 charges. Yekatom, who was turned over to the court in 2018, faces 21 charges.

Yekatom’s lawyer, Mylène Dimitri, argued that her client cannot adequately defend himself because prosecutors are withholding evidence that they have collected in their investigations into crimes by the Seleka.

Yekatom “is defending himself in the dark,” Dimitri told the panel.

Central African Republic’s government asked the ICC in 2014 to investigate crimes allegedly committed by both the Seleka and the anti-Balaka. So far, no Seleka fighters have been publicly targeted by the court’s chief prosecutor, Fatou Bensouda.