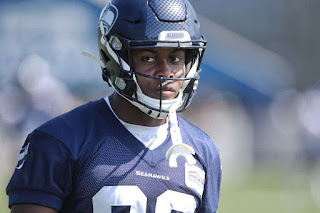 The boy was never supposed to have been conceived.

A Nigerian-immigrant mother, who'd already had four children, was dealing with serious health issues. She had heart problems during the birth of her most recent child. The doctor wasn't sure that her heart could handle the process again, so the message was clear and stern:

But she became pregnant again. Another child was on the way. She didn't tell the doctor that she was expecting a baby until four months later. Concern for her well-being grew to a peak.

No issues emerged throughout the pregnancy, however. And on May 16, 1997 in Nashville, she gave birth to a boy. There were no adverse health issues during labor. No heart issues. No side effects. Nothing. A miracle.

So she named the child 'Ugochukwu.' In the Nigerian language of Igbo, it means, 'a precious gift from God.'

It's a backstory to his life that Ugochukwu Amadi — Ugo for short — doesn't take for granted.

"People say how cool my name is and stuff like that," the Seahawks defensive back said. "It's a lot that I take pride in, especially the (Nigerian) culture that I'm from."

Amadi, a 2019 fourth-round pick out of the University of Oregon, takes pride in his game on the gridiron, too. Particularly with his versatility. The Seahawks are comfortable moving him around the secondary. And they like him for his special teams value, as both a punt returner and a gunner.

His big hit last Sunday on Vikings returner Olabisi Johnson in punt coverage, after beating a double team at the line of scrimmage, went viral on social media. It's been called perfection. In an era where rule changes have many football people scratching their heads on what it means to properly tackle, the 5-foot-9 Amadi showed the world how to do it in a nine-second span — with perfect timing and anticipation.

His emerging playmaking ability has made it hard to imagine a Seahawks' 53-man roster without him.


"He's just done something every time he's been out on the field," Seahawks coach Pete Carroll said. "He's been a really exciting player for us."

On defense, Amadi is shuffling back and forth between free safety and nickel for Seattle. He's been primarily used at the former, but Carroll said he's still very much in the competition for the slot cornerback role — Justin Coleman's spot last season. It's a starting position by default because of how frequently the Seahawks play in nickel packages.


Amadi said it's not challenging juggling multiple responsibilities. He understands that he's a rookie, and that it's important for his role to be fluid. He's new, so Seattle is trying to find the best spot for him. But he hopes that his plays, like his bone-crushing tackle last week, shows that he's eager to make a big impact as a rookie.

Amadi leads the Seahawks in the preseason so far in punt return attempts at four, netting 19 yards. He's tied for second with two special teams tackles. He has five tackles on defense (including a quarterback hit) and a pass deflection. He's even done kickoff return, too. Amadi returned one kick in the preseason opener against Denver for 15 yards.


"This is how I want to be able to come into the NFL," Amadi said. "I want my presence to be felt. I want to just make sure that I'm not here to play around. I'm here to make a living, to make a name for myself."

He was a big playmaker for the Ducks, especially on special teams. A Pac-12 All-Conference second-team selection in 2018, Amadi led the league with 15.93 yards per punt return. He became the first FBS player since 2015 and the first Pac-12 player since 2007 to record two pick-6's and a punt-return TD in the same year. As a senior, he was one of four Power 5 players with at least two interceptions returned for scores.

Amadi on defense posted 55 tackles, including five for loss, and 1.5 sacks in 2018. He was named a semifinalist for the Jim Thorpe Award, which is given annually to the top defensive back in college football.

He's been a humble learner in Seattle, according to teammate and fellow defensive back Bradley McDougald. He has stayed ahead of the game by constantly studying his playbook. He speaks less and listens more.

"If one player is getting coached, he takes the same advice for himself," McDougald said of Amadi. "You don't see him making a mistake that another rookie makes. That's a good trait to have."

Amadi has already performed a perfect tackle, but he doesn't know what his perfect rookie season would like yet. Why? He doesn't necessarily know what to expect. He's learning each day. He wants to run with the first-team defense in practice before he looks too far ahead.

But he does know the kind of effect he wants to have with the Seahawks in Year 1. He wants his competitive edge to show. He wants his teammates and peers to know that he's a playmaker — that when he gets the ball, he's going to do something with it. Something exciting.

He sees football as part of his name's meaning, his 'precious gift from God.'

"I'm going to be able to take care of my family with this career," Amadi said.