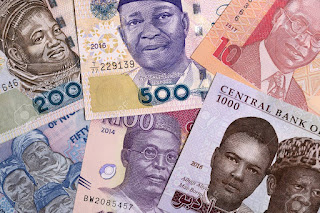 LAGOS, (REUTERS) - The Nigerian naira weakened to 364 per dollar on Friday, from a quote of 363.50 the previous day as falling oil prices tightened liquidity on the currency market, traders said.

A dollar shortage was initially caused by a slowdown of foreign inflows after local debt market yields declined.

The naira broke through resistance at 363 per dollar, where it has been quoted this week, as liquidity worsened, traders said.

Pressure has been building on the naira as oil prices drop and foreign investors book profits on local bonds in response to falling yields. Crude sales account for the bulk of Nigeria’s foreign-exchange earnings and government revenues.

“The (naira) is reacting to external shocks while local (dollar) demand is increasing,” one trader said.

“(Dollar) inflows have slowed, yields have tanked and oil prices are declining.”

The global oil price dropped to $58.69 per barrel on Friday while Nigerian oil suffered the slowest sales of the year in August, traders said, as U.S. exports of competing light, sweet grades flood traditional markets in Europe and Asia.

“The fall in the oil price could have been responsible for Wednesday’s (open market) treasury sale by the central bank. If the currency weakens further, the central bank might intervene,” another trader said.

The central bank held an unscheduled open market auction this week, its first such sale since mid-July as it sought to lure foreign investors to boost dollar liquidity.

It sold the most-liquid one-year bill at 12% owing to excess demand for the notes, lower than the 12.25% it paid at its last auction in July and compared with as high as 18% a year ago.

Nigeria operates a multiple exchange rate regime, which it has used to manage pressure on the currency. The official rate of 306.90 is supported by the central bank but the traded rate of 364 is widely quoted by foreign investors and exporters. (Reporting by Chijioke Ohuocha; Editing by Alison Williams and Dale Hudson)