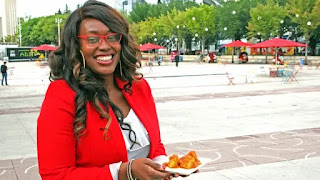 Nigerian chef Onyinye Blessing Okpala will be cooking at a pop-up dinner event on August 17 at Cafe Lavi.(Thandiwe Konguavi/CBC)

EDMONTON, CANADA (CBC) -- Puff puff won't be on the menu at a local chef's dinner event this weekend in Edmonton.

The deep-fried dough, a popular snack in West Africa is among the dishes that Onyinye Blessing Okpala is avoiding in her mission to bring cuisine from her native Nigeria to the fine-dining table. Fried plantain and pounded yam are also absent from the menu.

Okpala, a business analyst by day, will be cooking her signature dishes — a fusion of African and North American gastronomy — at Savory Bites and Jazzy Vibes, a 511 Kitchen Amour event on Saturday, at Cafe Lavi in the extended wing of the historical Gariepy Mansion.

"I was raised in Lagos, Nigeria, and that's pretty much where my passion for cooking started," Okpala said in an interview on CBC Edmonton's Radio Active on Tuesday. "I grew up with my mom hosting a lot of friends and family and cooking and I would spend time with her in the kitchen."

Okpala would also follow her mom to seafood and spice markets in Lagos.
Childhood dishes

When she moved to Canada for college, she missed her mom's home-cooked meals. Okpala started cooking them herself to stop the cravings but realized some of her favourite childhood dishes weren't that healthy.

"Growing up we ate yam porridge, and yam is heavily-carbed. So for example, if I was craving that, I would take out the yams and I would just make sweet potato porridge. So I'd make it the same way but I would just substitute the yams for the sweet potato," Okpala said.

"When I started my journey, one of the things that I was trying to do was recreate my food the healthy way."

"Egusi soup is usually prepared with a lot of palm oil and there's a lot of frying," Okpala said. "I found a way to make it healthier. I don't miss using palm oil."

"One of the major things that I'm really passionate about is fusing African and North American, precisely Canadian ingredients, to create signature dishes," Okpala said. "And that's pretty much what the heart of what 511 Kitchen Amour is. I want to bring the knowledge to people that you can eat healthy, you can still be African at the same time, and you can still be creative."
Canada Culinary Correctness Essay Foodie