US Imposes Visa Sanctions On Nigerians Who Undermined Democracy During Elections 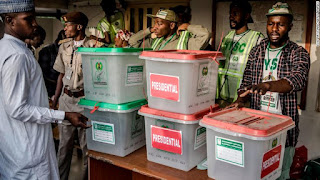 LAGOS (CNN) -- The US government has imposed visa restrictions on Nigerians who tried to undermine the country's democracy during February's general elections.

The US State Department did not name those affected but said the visa sanctions were targeted at some individuals who were involved in election violence, not the general population.

"These individuals have operated with impunity at the expense of the Nigerian people and undermined democratic principles and human rights," Morgan Ortagus, a State Department spokeswoman, said in a statement announcing the travel restrictions on Tuesday.

"This decision reflects the Department of State's commitment to working with the Nigerian government to realize its expressed commitment to end corruption and strengthen democracy, accountability, and respect for human rights, " she added.

The UK government and the US announced they were considering such sanctions in January, warning that those found inciting violence on social media and the polls might be prosecuted. Family members may also be affected by the travel restrictions, the US government said at the time.

Nigeria's general elections were marred by logistical delays, technical problems and violence.
At least 39 people were killed in election-related violence, according to local election observers, and two offices of Nigeria's Independent Electoral Electoral Commission were set on fire a few days before the presidential polls.