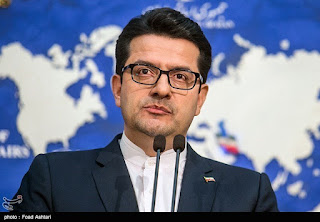 TEHRAN (TEHRAN TIMES) – The Foreign Ministry has summoned Nigeria’s envoy to Tehran to voice the Islamic Republic’s concerns over the conditions of top Shiite cleric and leader of the Islamic Movement in Nigeria (IMN) Sheikh Ibrahim al-Zakzaky.

“Recently, the Nigerian charge d'affaires was summoned to the Foreign Ministry and was informed about Iran’s concerns over Sheikh Zakzaky’s conditions in the African country,” Foreign Ministry spokesman Abbas Mousavi said at his bi-weekly press conference in Tehran on Monday.

“The Nigerian charge d'affaires offered some explanations and he is supposed to convey our concerns to the Nigerian government,” he added.

The spokesman expressed the hope that the Foreign Ministry’s efforts would yield results and that the prominent cleric would recover soon.

Iran has spared no efforts through diplomatic and political ways to resolve the issue, he stressed.

According to the Tasnim news agency, Sheikh Zakzaky has been held in detention since December 2015 and was charged just in April 2018 with murder, culpable homicide, unlawful assembly, disruption of public peace and other accusations. He has pleaded not guilty.

In 2016, Nigeria’s federal high court ordered his unconditional release from jail following a trial, but the government has so far refused to set him free.

The top cleric, who is in his mid-sixties, lost his left eyesight in a raid which was carried out by the Nigerian army on his residence in the northern town of Zaria in December 2015.

During the raid, Zakzaky’s wife sustained serious wounds too and more than 300 of his followers and three of his sons were killed. Zakzaky, his wife, and a large number of the cleric’s followers have since been in custody.

On Friday, the UK-based Islamic Human Rights Commission (IHRC) announced that it had received reports about Zakzaky’s health condition that it had further worsened.

The IHRC — which had sent a medical team to Nigeria in April to examine the health condition of Sheikh Zakzaky and his wife — has already said the specialist treatment they require can only be fully accessed outside the African country.