Lakeith Stanfield To Play Popular Young D.C. Chef In Movie Based On His Memoir 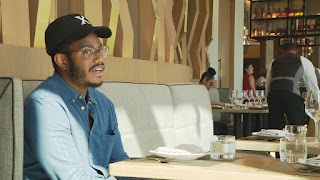 There were some bitter moments, which he talks about in his memoir “Notes from a Young Black Chef”.

The book documents his hardships in the Bronx, after joining a gang, the time his parents sent him to Nigeria to correct his behavior and his rise in the culinary world, after landing on the show “Top Chef”.

“I think the Nigeria scene is going to be an important one. That was the turning point in my life...really appreciate the small things....what I have here,” he said. “Going from playing PlayStation to doing your home work by kerosene lamp.”


Soon “Selma” and “Sorry to Bother You” star Lakeith Stanfield will be the main ingredient in the movie based on his memoir.

“Really, he’s my favorite actor, so for that to happen it’s incredible,” Onwuachi said. “I would honestly pick him, and to see that it actually came to fruition, it’s awesome.”

The 29-year-old Executive Chef at Kith and Kin has recently been named by Food and Wine Magazine as one the “Best New Chefs of 2019” and in May he received a James Beard Award for “Rising Star Chef of the Year.”

Onwuachi says he would like the movie’s name to be original.

“The True Life Story of Kwame Onwuachi or Kwame. All that is out of the question. It has got to be something that’s broad that a lot of people can relate to,” said Onwuachi.

While he waits for his story to be told on the big screen, his journey still continues off the screen.

“I’m still working, so it’s a wake-up call, someone calls out, you have to figure that out, process payroll...this is a moment that a lot of people dream of and I’m just happy to be apart of it, he said.
Africa Hollywood Newsroom Society