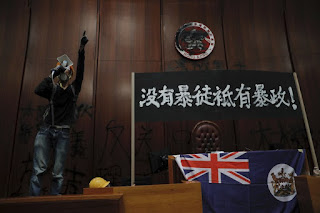 A protester shouts next to a defaced Hong Kong emblem and a banner reads "No thug, only tyranny" after they broke into the Legislative Council building in Hong Kong, Monday, July 1, 2019. Protesters in Hong Kong took over the legislature's main building Monday night, tearing down portraits of legislative leaders and spray painting pro-democracy slogans on the walls of the main chamber.(AP Photo/Kin Cheung)

HONG KONG (ASSOCIATED PRESS) -- A small group of protesters smashed their way into Hong Kong’s legislature on Monday in unprecedented scenes of chaos that escalated tensions over the Chinese territory’s political future.

It came the same day that hundreds of thousands joined a peaceful annual pro-democracy march in the former British colony.

Here’s a look at the protesters’ demands:

Protesters want the government to completely scrap plans for deeply unpopular extradition bills which were the catalyst for the current tensions. Hong Kong’s Beijing-approved leader, Carrie Lam, planned to introduce legislative amendments that could be used to send suspects to mainland China for trial.

Critics of China’s ruling Communist Party said that would put people in Hong Kong at risk of torture and unfair trials in the mainland and would further chip away at the “one country, two systems” framework under which Hong Kong has been governed since Britain ceded power to China in 1997.

Faced with enormous protests last month, Lam blinked. She dropped the bills for the current legislative session but refused to formally retract them.

Democracy supporters want Lam, who was not directly elected, to step down. It’s been a longstanding demand of the opposition in Hong Kong, where a committee of mostly pro-Beijing elite chooses the city’s leader, rather than its millions of eligible voters. Lam’s predecessor, the highly unpopular C.Y. Leung, was also the focus of calls for his resignation.

Hong Kong’s pro-democracy camp says it wants genuine democracy so the people can choose their own leader, rather than having candidates screened by Beijing — a demand that was at the core of youth-led “Umbrella Movement” protests in 2014 that brought parts of the city to a standstill for months. It says that will help avoid repeating scenarios in which polarizing figures who plan unpopular measures are installed in the top job.

Police clashed with protesters outside the legislature building, using metal batons, pepper spray, tear gas, beanbag rounds and rubber bullets. Video clips of police firing their weapons at unarmed protesters, in the city’s worst political violence since the handover, enraged Hong Kong residents. Local pro-democracy lawmakers have called for an independent inquiry into whether police used excessive force, while the police chief has defended the actions as appropriate.

Activists demand that Hong Kong authorities free all protesters arrested in or around last month’s extradition bill protests and stop classifying it as a riot. Police have said that 32 people were arrested but that only five were accused of rioting — a serious charge that can bring prison terms of up to 10 years.
Associated Press China Hong Kong Turmoil