HIV Deaths Generally Down One-Third, But Up In North Africa 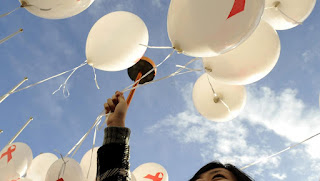 Deaths attributed or related to Human Immunodeficiency Virus (HIV) were down one-third since 2010 according to statistics released by the United Nations on Tuesday, but infection rates have risen in the Middle East/North Africa region and Eastern Europe.

Some 770,000 people died from AIDS-related deaths globally last year a huge drop from 1.2 million deaths in 2010. On the African continent, which is the most affected, numbers of AIDS deaths have dropped dramatically.

Part of this is attributed to the use of antiretroviral therapy (ART), as 23.3 million out of the estimated 37.9 million people living with HIV have access to ART, according to the annual UNAIDS report.

But deaths in the Middle East and North Africa region have risen by nine percent, and in Eastern Europe, by five percent.

And HIV infections in Africa have risen, with a 29 percent increase, as well as HIV-positive people in Eastern Europe, by 10 percent.

"Ending AIDS is possible if we focus on people not diseases... and take a human rights-based approach to reaching people most affected by HIV," she said.

Lack of political ill and cutting funding could cause the HIV rates to rise. Only 17 billion euros was available for AIDS research and funding, short of the 23.3 billion euros needed in 2020.

No cure or vaccine has been developed yet for HIV, which has infected some 80 million people and killed upwards of 35 million people since the early 1980s.

The report said that more than half of the new infections worldwide come from at-risk populations, including intravenous drug users, gay men, transgender people, sex workers and prisoners.

The findings showed that less than half of these people have access to HIV prevention services.

In a separate group, HIV infection rates in children are on the rise, with 160,000 new infections in 2018 more than 40 percent lower than 2010, but the numbers are still climbing.

These results are far off the Millennium Development Goals instituted by the UN, where countries pledged to have no more than 40,000 new HIV cases each year by 2018, and to ensure access to treatment for all who need it by 2010.