China Imports From US Plunge 31% In June Amid Tariff War 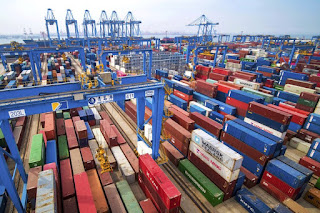 In this Tuesday, May 14, 2019, photo, containers are piled up at a port in Qingdao in east China's Shandong province. China's imports from the United States plunged 31.4% in June from a year earlier amid a tariff war with Washington, while exports to the U.S. market sank 7.8%, Customs data showed Friday, July 12, 2019. (Chinatopix via AP)

BEIJING (AP) — China’s trade with the United States plunged last month as a tariff war battered exporters on both sides of the Pacific Ocean.

And there’s no letup in sight: Tensions between the world’s two biggest economies continue to simmer even though President Donald Trump and his Chinese counterpart, Xi Jinping, called a ceasefire two weeks ago.

Data out Friday showed that the hostilities are taking a toll.

Chinese imports of U.S. goods fell 31.4% from a year earlier to $9.4 billion, while exports to the American market declined 7.8% to $39.3 billion, according to Chinese customs data. China’s trade surplus with the United States widened by 3% to $29.9 billion.

The two countries are fighting over U.S. allegations that China deploys predatory tactics — including stealing trade secrets and forcing foreign firms to hand over technology — in a headlong drive to challenge American technological dominance.

The dispute won’t be easy to solve. Mistrust between Washington and Beijing runs high. And a substantive solution likely would require China to scale back its ambitions to become a world leader in advanced technologies such as artificial intelligence and electric cars.

Envoys talked by phone Tuesday in their first contact since Trump and Xi met last month in Japan, the Chinese Commerce Ministry said. It gave no details or a date for more contacts.

“Our base case remains that trade talks will break down again before long,” said Julian Evans-Pritchard of Capital Economics in a report.

Trade weakness has added to pressure on Xi’s government to shore up economic growth and avoid politically dangerous job losses.

The Trump-Xi truce calmed jittery financial markets. But the cease-fire is under strain: Each side has complained the other isn’t living up to commitments made when the leaders met June 29 at the Group of 20 summit in Osaka, Japan.

The chairman of Huawei said Friday that his company has yet to see any benefit from Trump’s promise to ease restrictions on sales of components to the Chinese tech giant, which was put on a U.S. national security blacklist in May.

Liang’s complaint came a day after Trump accused Beijing of “letting us down” by not promptly buying more U.S. farm products.

“They have not been buying the agricultural products from our great Farmers that they said they would,” the president said on Twitter. “Hopefully, they will start soon.”

Trump’s statement “highlighted how more speed bumps may remain in the road ahead,” said Craig Orlam of OANDA in a report. “While a deal makes sense for both sides this year, it’s far from guaranteed and could hit many more snags.”