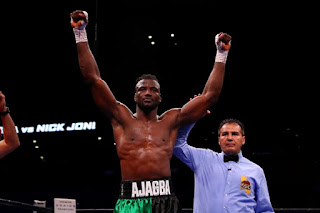 Efe Ajagba celebrates his win by knockout in the first round against Nick Jones during the heavyweight bout at Citizens Business Bank Arena on Sept. 30, 2018 in Ontario, California. (Joe Scarnici/Getty Images) via Yahoo


BY KEVIN IOLE
LAS VEGAS (YAHOO FINANCE) — The line has been used so much by now it’s all but cliche, but if you ask a boxing lifer where all the quality heavyweights have gone, the answer is almost always, “They’re either in the NBA or in the NFL.”
That notion, though, is slowly changing. Not only are there quality fighters at the top of the division — champions Andy Ruiz Jr. and Deontay Wilder, former champion Anthony Joshua, hot prospect Daniel Dubois and a raft of others — there are potentially elite talents on the rise.
One of those is 2016 Nigerian Olympian Efe Ajagba, a strapping, powerful athlete whom his highly regarded veteran trainer, Ronnie Shields, said is ready for anyone at this point.
Ajagba is just 10-0 and is still in the learning stages, so Shields isn’t about to throw him to the lions at this point. Shields, though, is convinced he has not only a potential champion on his hands, but also a potential future star.
Ajagba will fight Ali Eren Demirezen on the Manny Pacquiao-Keith Thurman undercard on Saturday (10 p.m. ET, PPV) at the MGM Grand. Ajagba is 10-0 with nine KOs and Demirezan is 11-0 with 10 KOs. Demirezen represented Turkey at the 2016 Olympics but lost in the first round to Filip Hrgovic.
However, Demirezan has amateur victories over both 2016 gold medalist Tony Yoka and silver medalist Joe Joyce.
Shields refers to these early fights for Ajagba as tests.
“As long as he keeps passing the tests the way he’s been doing, we’ll keep pushing him ahead,” Shields said.
Shields has trained some of the greatest fighters of the last 30 years, including Hall of Famers Evander Holyfield, Mike Tyson, Pernell Whitaker and Arturo Gatti, among many others.
When it’s mentioned to him that Ajagba is similar to another Hall of Famer, the 6-foot-5 ex-undisputed heavyweight champion Riddick Bowe, Shields quickly and vehemently disagrees.
“I think he’s going to be better than Riddick Bowe,” Shields said. “Absolutely. Look, Riddick Bowe came along at the right time. And to be fair, so is Efe. But the difference is, Riddick Bowe wasn’t a one-punch knockout kind of a guy. Efe Ajagba is.”
A former soccer player, Ajagba said he wasn’t very good at it and didn’t play much. But when he was introduced to boxing, the one thing he discovered quickly is that when he’d hit someone, he’d hurt them, often badly.
Shields has made tremendous improvements in his technique and overall game, but Ajagba brought to him the one thing that can’t really be taught.
“My power is natural and I’ve always had that,” a perpetually smiling Ajagba says. “Especially my jab. My jab has always been strong, and it has become a weapon. But when you ask me where the power came from, I’d just say it’s natural. I’m from Nigeria and I just have that natural power.”
It’s almost as if he were predestined to be a puncher. When he was an infant, his pediatrician told his mother he thought Efe would grow up to be a strong young man.
His mother told him the story and he scoffed. But now? Well, let’s just say he thinks the doctor might have known something.
“Hey, the doctor said it and my Mom told me and I’m seeing now, when I hit these people, they go like this,” he said, waving his hand back-and-forth to mimic a fighter who is having difficulty standing up. “I have that power. I guess I always have.”
If that power proves to be real against the elite, expect to hear the name Efe Ajagba plenty more in the next few years.
Newsroom Nigeria Sports