Why Did A U.S. Mission In Niger Turn Deadly? 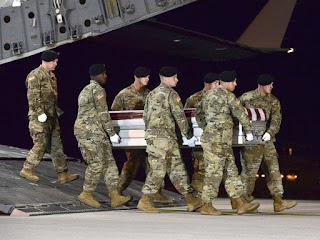 BY THE ABC NEWS INVESTIGATIVE UNIT

New reporting raises questions about the Pentagon’s answer, which placed most of the blame on a special operations team.

DEBRA GANNON’S SON, Sgt. 1st Class Jeremiah Johnson, was one of four U.S. special operations soldiers killed in Niger on October 4, 2017, when Islamist fighters ambushed their team. The clash near Tongo Tongo was the deadliest for U.S. forces in Africa since the “Black Hawk Down” battle in Mogadishu, Somalia, 24 years earlier. The foggy circumstances of the gunfight—the subject of much debate—have confused the families of the fallen, and the public.

Gannon believes her son, along with Staff Sgt. Bryan Black, Staff Sgt. Dustin Wright, and Sgt. LaDavid Johnson, fought heroically. But in an investigation into what went wrong, the military laid much of the blame on the team rather than its senior commanders. The Marine Corps general overseeing U.S. military operations in Africa praised special operations units for “serving well,” but pointed out, “This particular team is not indicative of what they do.”

The military’s conclusions stung the families of the deceased soldiers and contradicted what they were hearing from other team members and news reports. “That really infuriated me,” Gannon says. “They’re trying to make them look bad.”

Gannon’s son was part of a 10-man team training, advising, and working with 34 Nigerian soldiers. As they returned to base after searching a campsite recently used by an Islamic State affiliate leader, they were attacked by more than a hundred extremists. 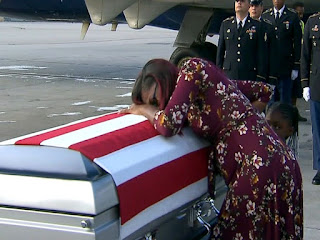 Myeshia Johnson sobs over the casket of fallen soldier and husband, Sgt. La David Johnson, who was killed in Niger.


In a yearlong investigation, ABC News learned from multiple sources that the Pentagon, in briefings for the grieving families, withheld information about the crucial decisions that put their sons in harm’s way. Most significantly, sources inside and outside the armed forces told ABC that the team’s captain had strenuously objected to the mission, calling it too dangerous for his lightly armed unit, which was given scant intelligence and no armed backup. He was overruled by his commanders.

“If he had been listened to,” says Hank Black, “my son and Jeremiah, LaDavid, and Dustin would be here today.”

The Army general who led the initial investigation into the firefight said it was his “solemn responsibility” to the families of the fallen soldiers to be “accurate and transparent.” But in exclusive interviews with ABC News, family members say they are outraged and anguished by the military’s conclusions, which the Defense Department has reaffirmed.

Myeshia Johnson, LaDavid Johnson’s widow, says her family has been through “so much pain and so much suffering,” but won’t be able to heal without knowing the full truth. “I feel like they’re covering everything up,” she says. “Just say what really happened. That’s all you have to do.”

After receiving the Pentagon’s final report on June 5, family members were stunned and angered, saying that it failed to disclose important facts and downplayed the captain’s objections. They pledged to keep pushing the U.S. military for answers until the truth is known.

“We are not done fighting,” says Gannon.