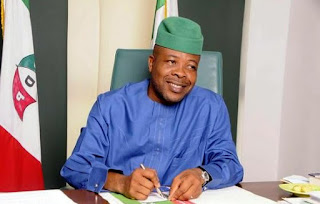 OWERRI (DAILY SUN) -- Imo State Governor, Emeka Ihedioha, has said his administration would not be run on propaganda.

This was just as he reiterated that his government would recover all assets, property, funds and private lands forcefully acquired by the immediate past governor, Owelle Rochas Okorocha and officials of his administration.

He also disclosed his administration would set up team of legal experts for the review and update of the extant laws of the state to be in tandem with the objective of his administration to develop both infrastructurally and industrially.

The governor stated this, yesterday, while declaring open a three-day retreat/orientation for Imo State House of Assembly members-elect of the ninth Assembly held at the Crystal Lake Resort, Oguta.

“We are not going to run an administration based on propaganda and we will not be distracted by those who have already decided to bad mouth us. What we promised the people of the state is that besides restoring the state to progress, we are going to recover all looted funds, assets, property and private lands that were forcefully acquired by the immediate past governor, Rochas Okorocha and officials of his administration. We are compiling a comprehensive list of those involved in the criminal act and would soon be forwarded to security agencies.

“You cannot run a state the way you like, you don’t just take away the property of a state; that is stealing and we will criminalise you. If government is run the way the immediate past administration did, former governors of the state would have left nothing for their successors. I can’t just swallow the lie that I have been handed over to when I wasn’t.”

He maintained that his administration is going to review all land allocations immediately, stressing that it did not matter when it was back dated as the administration has already secured the services of forensic experts to determined the actual date when such lands were allocated.

He re-emphasised his commitment to qualitative education, poverty and unemployment alleviation, wealth creation, massive investment in agriculture, good quality health care for the people as well as an enabling environment to make the state a preferred destination for business.
Corruption Emeka Ihedioha Igbo Imo State Owerri