US Extradition Case Against Assange Set For Next Year 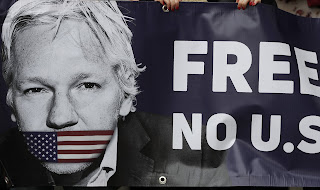 Assange supporters hold a banner to protest outside Westminster Magistrates Court in London, Friday, June 14, 2019. WikiLeaks founder Julian Assange is expected to appear via a video link at court Friday, as he continues his fight against extradition to the United States, where he faces prosecution under the Espionage Act. (AP Photo/Frank Augstein)

BY THE ASSOCIATED PRESS

LONDON (AP) — A British court has set a date early next year for WikiLeaks founder Julian Assange to face a U.S. extradition attempt over his role in revealing classified government and military information.

Ben Brandon, a British lawyer representing the U.S. government, told a court hearing Friday that the case “related to one of the largest compromises of confidential information in the history of the United States.”

U.S. officials are seeking to prosecute Assange under the Espionage Act, blaming him for directing WikiLeaks’ publication of a huge trove of secret documents that disclosed the names of people who provided confidential information to American and coalition forces in Iraq and Afghanistan.

Assange asserts that he is a journalist with First Amendment protections and is fighting the extradition attempt. Judge Emma Arbuthnot set a full extradition hearing for Feb. 25, 2020. It is expected to last about five days.

The 47-year-old Australian hacker is currently in Belmarsh Prison on the outskirts of London serving a 50-week sentence for jumping bail in Britain.

He was too ill to attend a recent hearing and appeared at Friday’s hearing at Westminster Magistrates’ Court by video link from prison.
Associated Press News Desk Press United States