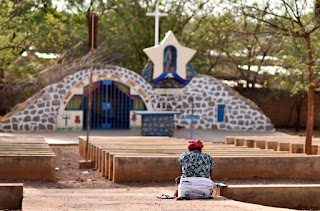 A displaced Christian woman prays in front of a grotto with a statue of Mary in Kaya, Burkina Faso, May 16, 2019. Bishops' conferences from Francophone West Africa have pledged solidarity with Christian communities after a spate of Islamist attacks. (Credit: CNS photo/Anne Mimault, Reuters.)

WASHINGTON, D.C. (CATHOLIC NEWS SERVICE) - The chairman of the U.S. Bishops’ Committee on International Justice and Peace offered condolences to the Catholic Church in Burkina Faso following a wave of attacks on churches there.

Archbishop Timothy P. Broglio of the Archdiocese for the Military Services said the U.S. Church stands in solidarity with the Burkinabe people in a letter to Archbishop Paul Yembuado Ouedraogo of Bobo-Dioulasso, Burkina Faso, president of the Catholic Bishops’ Conference of Burkina Faso and Niger.

“I join the Holy Father in his statements and expressions of condolences and support in reaction to these church attacks and add my own following the most recent attack on a Catholic church 26 May in Toulfe that killed four people,” Broglio said in the letter released June 7.

He acknowledged how Burkina Faso has “struggled to build a democratic country where Christians and Muslims” can live side by side in peace. He said he hoped that the Burkinabe people “will persevere and protect liberty, democracy, and the right to freedom of religion.”

Overall, at least 400 people have died in attacks on churches, schools and government buildings in Burkina Faso, whose mostly Muslim-inhabited northern provinces have been targeted by extremists since the October 2014 ouster of President Blaise Compaore.

In the most recent incident, armed assailants broke into Our Lady of All Joy Church in the village of Toulfe during Mass May 26 and opened fire, said Bishop Justin Kientega of Ouahigouya, Burkina Faso. Two people, including an elderly catechist, were wounded, he said.

Local media reported that no group had claimed responsibility for the attack but said that the government had blamed Muslim militants operating in the Sahel region from neighboring Mali.
Burkina Faso Newsroom Religion Religious Violence