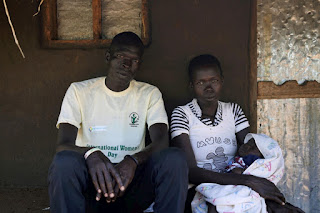 Abraham Bidal, here with his wife Betty and two-month-old child, has been a refugee three times, fleeing to Uganda every time. He noticed less trees on each journey. Image: Michele Sibiloni/UNHCR

KAMPALA JUNE 14, 2019 (UNHCR) -- The United Nations Refugee Agency, the UNHCR, welcomes South Sudan’s accession this month to the African Union Convention for the Protection and Assistance of Internally Displaced Persons in Africa, also known as the Kampala Convention.

South Sudan becomes the 28th African Union Member State that has acceded to the Convention, the world’s first and only regional legally binding instrument for the protection and assistance of internally displaced people (IDPs).

More than four million people, including an estimated 1.8 million IDPs, find themselves forcibly displaced from or within South Sudan owing to conflict and violence.

IDPs often face heightened risks, violations and sexual violence because of their displacement, while they struggle to access their rights and basic protection. As a result, they remain in dire need of humanitarian assistance.

For South Sudanese IDPs, housing, land and property issues are also a concern, particularly for women and child-headed families, the majority of whom find their homes destroyed or occupied by others.

Accession to the Kampala Convention is an affirmation by States of their primary responsibility to protect, assist and provide solutions for IDPs. The Convention also calls for national and regional actions to prevent arbitrary displacement, to ensure IDPs are protected and assisted, and to support durable solutions.

To give effect to the provisions of the Convention, countries that accede may need to take further steps for its implementation by passing national legislation.

UNHCR, which supported the African Union, including through the process of drafting the Convention, supports governments in ensuring its incorporation into domestic law. In collaboration with the African Commission on International Law, UNHCR has assisted the development and dissemination of a model law on the Kampala Convention.

Globally, 41 million people remain displaced inside their own countries as a result of armed conflict, generalized violence or human rights violations.

To address internal displacement across Africa and to provide a legal framework for the protection and assistance of IDPs, the Kampala Convention was adopted at a meeting of the African Union (AU) in October 2009. This year marks ten years since its adoption.

The AU is one of UNHCR’s most important partners and a leader in global efforts to resolve forced displacement. Under its watch, landmark treaties on refugees and on internal displacement have been adopted to help millions in Africa and beyond.

The AU has designated 2019 as its “Year of Refugees, Returnees and Internally Displaced Persons”, with the aim of promoting durable solutions to forced displacement in Africa.

UNHCR urges AU Member States who have not yet done so to ratify and implement these conventions.
Africa African Union Newsroom Southern Sudan Uganda United Nations