Trump Says No More 'Death To America' In Iran 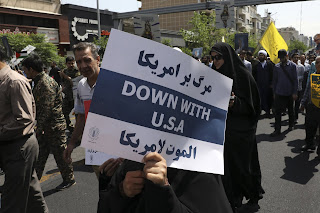 WASHINGTON (AP) — They still cry “death to America” in Iran.

President Donald Trump claimed otherwise in a Fox News interview as he took credit for a taming of Iran that is not apparent in its actions or rhetoric.

THE FACTS: Not true. The death-to-America chant is heard routinely.

The chant, “marg bar Amreeka” in Farsi, dates back even before Iran’s 1979 Islamic Revolution. Once used by communists, it was popularized by Ayatollah Ruhollah Khomeini, the revolution’s figurehead and Iran’s first supreme leader after the U.S. Embassy takeover by militants.

It remains a staple of hard-line demonstrations, meetings with current Supreme Leader Ayatollah Ali Khamenei, official ceremonies, parliamentary sessions and main Friday prayer services in Tehran and across the country.

Some masters of ceremonies ask audiences to tone it down. But it was heard, for example, from the crowd this month when Khamenei exhorted thousands to stand up against U.S. “bullying.”