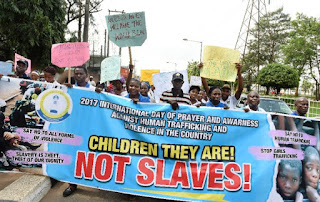 The UN said human trafficking in Nigeria was not always north towards Europe but also to the Gulf, Russia and southern Africa mainly for sexual and labour exploitation. Image: Pius Utomi Ekpei/AFP

ABUJA (PUNCH) -- Human traffickers under the guise of the 2018 World Cup recruited Nigerian women for jobs in Russia and later exploited them for sex work, the United States 2019 Trafficking in Persons report has said.

The report, published by the US Department of State on Thursday and obtained by our correspondent, noted that 1,863 Nigerians remained in Russia without travel documents.

The 2019 TIP report, which presented a country-by-country situation report on human trafficking, said the Nigerian government failed to convict complicit government officials despite reports of officials committing a variety of trafficking offences each year.

“The government also identified fewer trafficking victims and did not fully disburse the budget allocated to the National Agency for the Prohibition of Trafficking in Persons.

“Authorities identified Nigerian trafficking victims in at least 34 countries in four regions during the reporting period. Nigerian women and girls are subjected to sex trafficking within Nigeria and throughout Europe, including in Italy, Spain, Austria, and Russia.

“Following relaxed visa requirements for the 2018 World Cup in Russia, traffickers fraudulently recruited Nigerian women for jobs in Russia and later exploited them in sex trafficking; as of early 2019, 1,863 Nigerians remained in Russia without travel documents.”

The US Secretary of State, Michael Pompeo, in the report summary, said traffickers robbed a “staggering 24.9 million people of their freedom and basic human dignity which is roughly three times the population of New York City.”

The NAPTIP Director-General, Julie Okah-Donli, in her reaction, said the agency disagreed with the US report in certain aspects.

She said, “We are gratified but not satisfied that Nigeria was upgraded from Tier 2 Watch List which the country has occupied for two years. The report noted all the efforts made by NAPTIP and other duty bearing agencies to respond effectively to human trafficking but still insisted that the government of Nigeria does not fully meet the minimum standards for the elimination of trafficking.

“Looking though the report, it is clear that the efforts of the Nigerian government and NAPTIP in particular have not been given due credit.”


Copyright PUNCH.
All rights reserved. This material, and other digital content on this website, may not be reproduced, published, broadcast, rewritten or redistributed in whole or in part without prior express written permission from PUNCH.