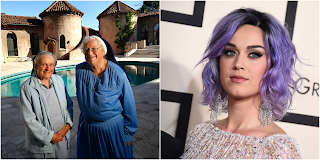 LOS ANGELES (INSIDER) -- The last living nun of the convent who fought off Katy Perry's purchase of a Los Angeles property isn't giving up on the feud.

Sister Rita Callanan, 81, told the New York Post that the singer "has blood on her hands" after the lengthy legal battle over the former home of Sisters of the Most Holy and Immaculate Heart of the Blessed Virgin Mary in Los Angeles.

Her comment comes as the home is back on the market after years of legal troubles, and more than a year after 89-year-old Sister Catherine Rose Holzman died in March 2018 while in court battling Perry's lawyers.

Holzman pleaded to KTTV for the singer to back off the sale hours before she died, saying: "To Katy Perry, please stop."

"It's not doing anyone any good except hurting a lot of people," Holzman said as she entered the courthouse with Sister Callanan.

The nuns took aim at Perry after a tangle of ownership issues and their personal disapproval of the singer.

On her mission to woo the nuns into accepting the sale, Perry reportedly sang"Oh Happy Day" for them at a meeting regarding the sale, and showed them a "Jesus" tattoo on her wrist.

It apparently didn't do the trick, as Holzman wrote to an archdiocese official that if they sold to Perry, they would feel they "are being forced to violate our canonical vows to the Catholic Church."

She went further in a 2015 Billboard interview, saying "Katy Perry represents everything we don't believe in," and "it would be a sin to sell to her."

In 2015, Perry ended up buying the convent for $14.5 million in cash from the Los Angeles archdiocese. However, the nuns contend that this was a wrongful sale because they purchased the property with their own money in 1972.

After they were reportedly forced to relocate in 2011, they approved a sale to businesswoman Dana Hollister in 2015. The archdiocese objected to the sale and in 2016, a judge declared the transaction invalid, and Perry and the archdiocese were awarded damages of more than $15 million.