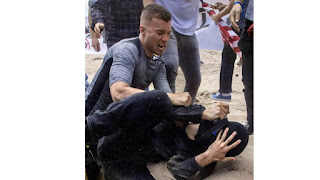 
LOS ANGELES (ORANGE COUNTY REGISTER) — A Los Angeles federal judge Monday dismissed all charges against three reputed members of a Southern California white nationalist group suspected of having incited brawls at political rallies.
U.S. District Judge Carmac J. Carney granted a defense motion dismissing charges against Robert Rundo, Robert Boman and Aaron Eason on grounds that the federal riots act — under which they were charged — “is unconstitutionally overbroad in violation of the First Amendment.”
A fourth defendant, Tyler Laube, pleaded guilty in November in Los Angeles to a single count of conspiracy to violate the federal Anti-Riot Act of 1968. The status of his case is not immediately clear.
“We are disappointed in the court’s ruling and we are reviewing possible grounds for appeal,” said Ciaran McEvoy, a spokesman for the U.S. Attorney’s Office in Los Angeles.
Carney wrote in his ruling that the act goes well beyond criminalizing the behavior of those acting in the midst of a riot.
“It also criminalizes acts taken long before any crowd gathers,” or acts that have only a slight connection to violence, according to Carney.
“No violence even need to occur,” the judge wrote. “A defendant could be convicted for renting a car with a credit card, posting about a political rally on Facebook, or texting friends about when to meet up.”
As part of their case against Eason, for example, prosecutors alleged that the defendant used a credit card to rent a van to drive to an April 2017 “Patriots Day” free-speech rally in Berkeley that turned violent. Videos posted online show Eason and other RAM members next to a “Defend America” sign with hands taped for fighting and faces partially covered by skeleton masks, federal authorities further alleged.
Carney also determined that the defendants’ actions fell under protected speech.
“It is easy to champion free speech when it advocates a viewpoint with which we agree,” the judge wrote. “It is much harder when the speech promotes ideas that we find abhorrent.”
The four suspected members of the so-called Rise Above Movement were indicted by a Los Angeles grand jury in November for allegedly inciting violence against counter-protesters, journalists and others at rallies throughout the state, including 2017 events in Huntington Beach, Berkeley and San Bernardino.
Eason, 39, of Anza in Riverside County; Laube, 22, of Redondo Beach; Rundo, 29, of Huntington Beach; and Boman, 25, of Torrance were charged with one count each of conspiracy to commit rioting and travel with intent to riot. Each of the two counts carry sentences of up to five years in federal prison, according to the U.S. Attorney’s Office.
In October, federal authorities arrested four other suspected RAM members, including alleged RAM founder Ben Daley, 26, of Redondo Beach. He and three others pleaded guilty in federal court in Virginia to the conspiracy count in connection with their suspected roles in the deadly 2017 far-right rally in Charlottesville, Va.
California Judiciary Los Angeles Newsroom Southern California