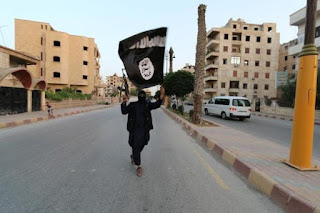 A member loyal to the Islamic State in Iraq and the Levant waves an ISIS flag in Raqqa, on June 29, 2014. | (Photo: Reuters/Stringer)

Islamic extremists in West Africa have reaffirmed their allegiance to the Islamic State and its leader, Abu Bakr al-Baghdadi, as deadly attacks occurred with greater frequency across the Sahel region in the last several months.

The Long War Journal, a news outlet operated by the Washington-based policy institute Foundation for Defense of Democracies, reports that militants in Mali and Burkina Faso released a short video Saturday renewing their fealty to the caliphate of Abu Bakr al-Baghdadi.

The video comes as deadly attacks blamed on extremist groups continue to be carried out in northern Burkina Faso, Mali, Niger and Nigeria, resulting in the loss of countless lives.

According to FDD senior fellow Thomas Joscelyn, the Islamic State West Africa Province continues to compete with al-Qaeda loyalists in the region for the allegiance of potential terrorists.

Joscelyn explained that the new video published on Saturday is “intended to underscore the commitment of Baghdadi’s followers despite setbacks in Iraq and Syria.” In Iraq and Syria, the Islamic State has largely been pushed out of its strongholds, but sleeper cells do still exist.

“The footage is introduced with a text slide declaring the fighters’ solidarity with the Islamic State, saying they are still ‘loyal’ to their oath and will continue to battle the forces of unbelief, which claim to have ‘eradicated the caliphate,’” Joscelyn details.

“The jihadists ask Allah to grant Baghdadi’s caliphate ‘glory’ in ‘perpetuity.’ The text then declares that the jihadists’ ‘renew’ their [pledge of allegiance] to the ‘caliph of the Muslims, the mujahid Sheikh Abu-Bakr al-Husseini al-Qurashi al-Baghdadi.’”

Amid a rise in attacks in northern Burkina Faso, concerns have been raised about Christians being driven almost completely out of villages. A number of attacks in recent months have targeted churches and worshiping Christians in the country.