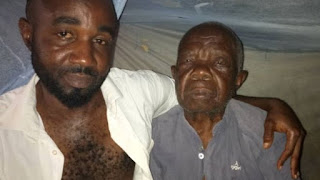 Celestine Egbunuche and his son Paul have been in jail for over 18 years for murder. Image via BBC.

Egbunuche, who would be 101 years on August 4, has for over 18 years lived in desolation and hopelessness within the confines of Enugu Maximum Prison.

Daily Sun reliably gathered that his release was one of the last actions taken by former governor Rochas Okorocha before he vacated the Douglas House, Owerri, on May 28.

The NGO, in letters dated September 5, 2018 and signed by its President, Franklin Ezeona, had urged that the centenarian be freed to go home and die peacefully.

South East/South South Regional Director of GSAC, Mrs. Amaka Nweke, confirmed the development yesterday, disclosing that the prison authorities in Enugu were already perfecting papers for his release any moment from now.

Pa Egbunuche hails from Akokwa in Ideato North Local Government Area of Imo State, and was condemned to death along with his son, Paul Egbunuche, and another relation, now 88.

They were said to have been involved in a land dispute in which somebody slumped and died in the process.

Daily Sun had, in an exclusive report of August 8, 2018, captioned, “Nigeria’s oldest prisoner clocks 100 in Enugu,” jolted the world with the pathetic story of the centenarian, who reportedly lost his sight few days after the birthday.

The news went viral on the social media, raising questions to how a centenarian could still be in prison in Nigeria, when in other climes, inmates above 65 years are eligible for either parole or state pardon.

Abuja-based rights lawyer, Ugochukwu Ezekiel, who had lent voice to the call for Pa Egbunuche’s release, yesterday asked government not to abandon the man but instead, he should be fully rehabilitated.