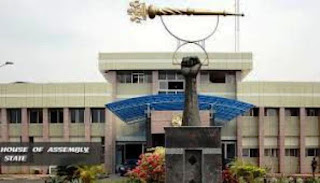 Owerri (VANGUARD) — Imo State House of Assembly yesterday, suspended indefinitly, chairmen of the 27 local government areas of the state, councillors, as well as all the boards’ appointments made by the immediate past governor, Rochas Okorocha.

Affected also in the indefinite suspension were all the recently-named universities, polytechnics and colleges of education.

The House, among other things, also mentioned that the Economic and Financial Crimes Commission, EFCC, be invited with a view to unravelling the true financial status of Imo State as well as its debt profile.

It further ordered that the former Speaker, Acho Ihim, be stripped of his privileges, alleging that he derailed the House.

The reasons for their action were heaped on what some of them claimed to be “bad leadership of the former Speaker, Ihim, which stifled our voices

Vanguard was told that the last minute dramatic indefinite suspensions were made by the core loyalists to Governor Okorocha.

Vanguard learned that the action of Imo House of Assembly came after adopting a motion moved by Mike Iheanetu(Aboh Mbaise state constituency), demanding for the immediate dissolution of the last minute appointments and boards by the Okorocha government.

In another motion, which was moved by the member representing Ezinihitte Mbaise, Bruno Ukoha and adopted, he called for the indefinite suspension of the council bosses and their vice chairmen.
Imo State News Desk Owerri Vanguard