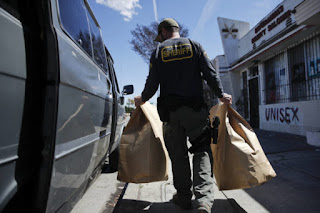 In this March 15, 2018 file photo, an undercover Los Angeles County sheriff's deputy loads two evidence bags into a van after raiding an illegal marijuana dispensary in Compton, Calif. The legal marijuana industry is urging Los Angeles City Hall to get tougher with illegal shops that are gouging into their business. Illegal pot shops are widespread throughout Los Angeles, selling cheaper products than their legal rivals because they don't pay taxes. In a letter Monday, June 10, 2019, the industry group Southern California Coalition recommended the city consider seizing cannabis inventory and cash from illegal shops that are found to be selling tainted products. (AP Photo/Jae C. Hong, File)

LOS ANGELES (AP) — The legal marijuana industry urged Los Angeles City Hall on Monday to get tougher with illegal shops that are gouging their businesses in open sight.

Illegal pot shops are widespread throughout Los Angeles and typically look like the real thing. And they’re thriving — they sell cheaper products than their legal rivals because they don’t charge hefty state and local taxes.

In a letter Monday, the industry group Southern California Coalition recommended the city consider seizing cannabis inventory and cash from illegal shops that are found to be selling tainted products.

In the legal market, marijuana, concentrates, cookies and other products must be tested by independent labs for consumer safety — a requirement that illegal shops can ignore.

The group said that the failure to seize cash and pot products from illegal shops after raids allows the business to quickly reopen.

With no testing safeguards in place in the illegal market “there’s a high probability the … cannabis products in these shops are contaminated,” the group wrote.

They urged the city “in the strongest possible terms to continue testing cannabis … in unlicensed shops.”

California’s effort to transform its longstanding illegal and medicinal marijuana markets into a unified, multibillion-dollar industry kicked off last year. But the transition has been uneven and it’s likely to take years for the legal market to find its footing.

Many communities ban marijuana sales and growing, leaving residents in those places without access to legal shops. Businesses complain about hefty tax rates that can approach 50 percent in some communities, which they say drive consumers into the tax-free illicit market. There’s on ongoing fight over home deliveries, and a promised tax windfall never arrived.

There have been problems in other states with legal marijuana. In Nevada, a court fight is underway after some businesses charged that the state system for awarding licenses is unfair. In Oregon last year, an excess of marijuana in the supply chain prompted regulators to suspend processing new applications for marijuana business licenses.

In Los Angeles, the industry group said that many legal shops are being driven toward bankruptcy because they are surrounded by rogue shops undercutting them.

The group also recommended ticketing employees at rogue shops to discourage them from returning, and having building inspectors always accompany police on raids to close down unsafe structures. They also suggested the city consider placing tax liens on illegal shops.